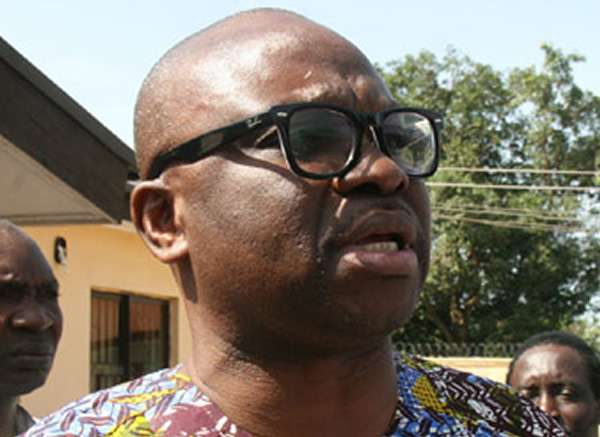 Fayose also told newsmen that the PDP will resist any attempt by anyone to rig the election.
Governor Ayo Fayose has asked supporters of Eyitayo Jegede, the Peoples Democratic Party (PDP) guber candidate in the Ondo governorship election to protect their vote.

The Governor said this on Thursday, November 24, 2016, while campaigning for Jegede on the streets of Ondo state.
According to Punch, Fayose also told newsmen that the PDP will resist any attempt by anyone to rig the election.

He said “You have to stand strong on Saturday. Votes must be counted in your presence. There is a difference between a struggle and a movement.  Both are different from (political) parties. The movement is that Eyitayo must be governor of Ondo State.”


The Court of Appeal, Abuja on Wednesday, November 23, 2016,  re-listed Jegede as candidate of PDP in the November 26, 2016 Ondo governorship election.

The state government also declared today, Friday, November 25, 2016, as a public holiday to enable residents prepare for the election