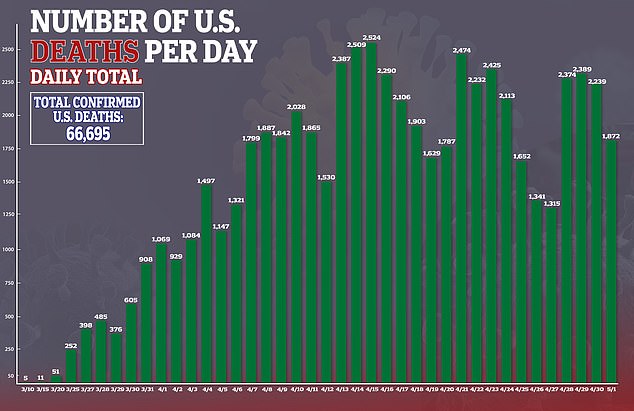 Johns Hopkins University tally recorded more than 1.1 million cases in the country as of 8:30 pm Saturday with with 66,224 deaths

The United States has by far the highest death toll of any country in the global pandemic.

Michigan, New York and New Jersey all reported more than 200 deaths in the past day.

The national number of infections climbed to 1,150,335 after new daily infections spiked by 35,052 on Friday. This was the third highest number of new cases in a day in America since the start of the pandemic.

The highest number of new deaths in the past day was in New York, where 299 were reported, bringing the state’s total to 18,909.

The state’s fatality rate is at 7.6 percent, almost two percent higher than the national rate.

The lowest fatality rate is in Utah where there have been 4,985 cases and 49 deaths. The death rate stands at 1 percent.

New Jersey’s fatality rate also soars above the national figures after recording 204 new deaths in the past 24 hours to bring the state’s total to 7,742.

Michigan now has more than 40,000 cases of COVID-19. The virus has killed more Michiganders than we lost during the Vietnam war.

California coronavirus fatality rate is at 4.1 percent but it recorded 88 new deaths in the past day. California has suffered 2,137 coronavirus deaths and has 52,296 cases.

Other state hotspots include Illinois, Maryland, Connecticut, Pennsylvania and Indiana. All but Illinois reported less than 100 new deaths in the past 24 hours

Connecticut also has the second highest fatality rate in the country, however, at 8.1 percent. It has had 2,339 deaths and 28,764 cases.