Regina Daniels- the Star actress and wife of Nigerian politician and business man, Ned Nwoko., dropped out from Igbinedion University located at Edo State to another university in United Arab Emirates, Dubai.

Regina Daniels shared a video footage of herself in class at the University in United Arab Emirates. 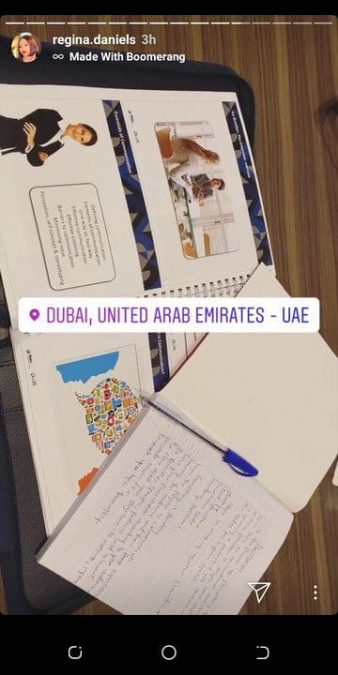 She shot into limelight when she featured in a Nollywood movie titled ‘Miracle Child’ in 2010.

Regina was famous in the Asaba Nollywood caucus but began to command attention especially on social media, after former Vice President Atiku Abubakar appointed her his youth campaign coordinator for Nollywood in January.

For many years, Regina was recognised as one of Nigeria’s finest child stars who won many hearts after she starred in ‘Marriage of Sorrow’, at age seven.

Mr. Nwoko has had a long-time affair with the Nigerian entertainment scene having bankrolled some movie projects in the past. The billionaire-politician also financed his wife’s latest movie project ‘The Enemy I know’ which featured musician, Naira Marley.

She starred alongside popular actors like Ini Edo, Chika Ike and Mercy Johnson in the movie.