His decision comes few days after the national body of the APC submitted the name of Governor Nasir El-Rufai’s political adviser, Uba Sani, as the candidate for that senatorial district.

The national working committee (NWC) of the APC had cleared Shehu Sani as the only candidate for the senatorial district but Nasir el-Rufai, governor of the state, kicked against it.

Subsequently, a primary election was conducted in the district and Uba Sani, the preferred candidate of el-Rufai, was declared winner.

The serving senator had boycotted the primary and filed an appeal and the party upheld his appeal but the name of el-Rufai’s candidate was sent to the Independent National Electoral Commission (INEC).

Sani has been very vocal against the Buhari and El-Rufai’s administration.

The senator made his resignation known in a letter to the party chairman of the APC in ward 6, Tudun wada north, Kaduna.

The letter reads, “I present to you my highest compliments and wish by this communication to formally offer to you my resignation from the All Progressives Congress (APC).

“l had joined the APC and remained with it against all odds in the belief that it will constitute a veritable platform for the realization of those democratic ideals which I hold very dear, that honor and integrity will be the ultimate ethos of the patty and, most importantly, that internal party democracy will always be the norm. However, only posterity can affirm the extent to which the APC has committed to and reflected these values.

“As I exit the APC at this point in time. I wish to formally thank the party for availing me the platform upon which I am currently serving this country in the honoured capacity of Senator of the Federal Republic.

“I wish the party well in all her future endeavors and ask sir, that you please accept the assurance of my highest considerations.”

Controversies had trailed the decision of the All Progressives Congress (APC) to grant automatic return ticket to the senator and others.

Days after the APC headquarters announced Mr Sani as its only candidate cleared to contest the Kaduna Central senatorial seat, the Kaduna State Government and its officials continue to condemn the decision, claiming it had been reversed.

Mr Sani and Mr El-Rufai have been at daggers drawn shortly after both men were elected senator and governor respectively in 2015.

See a copy of the letter below: as obtain by Premium  times 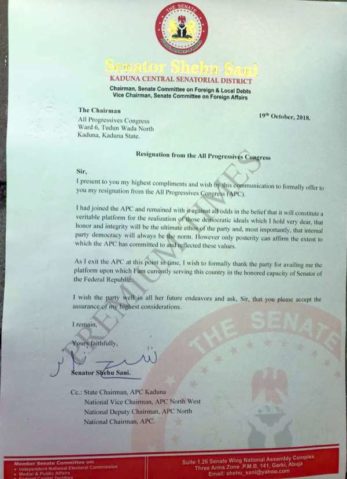 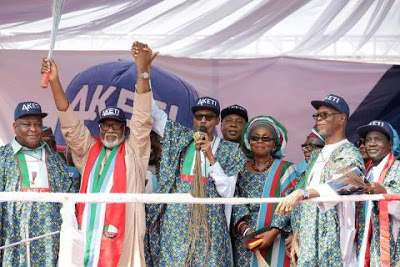 The Plateau state Governor Lalong said on Monday, November 21, that the South West All Progressives Congress governors who were absent at the Saturday APC…

The Senate caucus in All Progressives Congress APC} with the party’s National Working Committee demanded the withdrawal of the suit against the Senate President, Dr. Bukola…

Th former Minister of Aviation, Femi Fani-Kayode on facebook described his sadness as the former mnister for state Defense decamp from PDP to APC. Fani-Kayode…