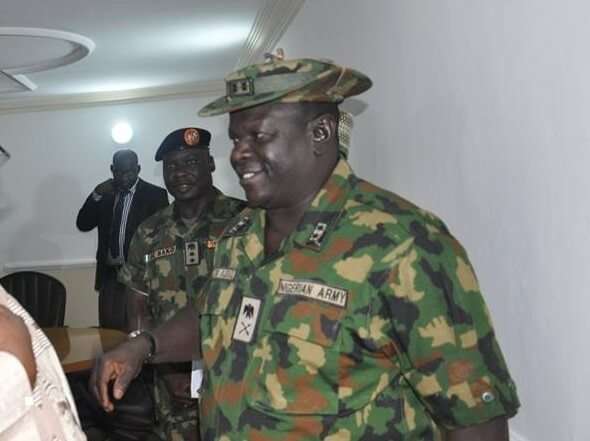 The immediate past Chief of Administration, Army Headquarters, Abuja, was declared missing on the September 3, 2018, after he disappeared while travelling alone in his car from Abuja to Bauchi State.

This comes exactly one week after the Nigerian Army handed over 13 suspects to the police including a female for further investigation and possible prosecution.

Retired General Alkali has been missing since September 3 and his black Toyota Corolla vehicle with a Kwara State registration number MUN 670 AA had been pulled from an old mining pond around Dura-Du on September 29.

A statement by the spokesperson of Plateau State Police Command, Matthias Tyopev, a Deputy Superintendent of Police, said preliminary investigation revealed that the suspects masterminded and executed the disappearance of Alkali.

On September 20, 2018, around 500 women clad in black staged a protest against a Joint Task Force set up by the Nigerian Army at a mining pond at Dura, Du District, Jos South local government area of Plateau State.

The task force was acting on a directive from the Chief of Army Staff, Lieutenant-General Tukur Buratai, to locate Major General Idris Alkali (rtd), the immediate past Chief of Administration, Army Headquarters, Abuja, who was declared missing on the September 3. Alkali had been travelling alone in his car from Abuja to Bauchi State when he went missing.

During the course of its investigation, the team received credible intelligence that made it important to examine the content of the mining pond at Dura, Du District where the women protested.

The team’s decision to evacuate the water from the pond, after receiving intel that vehicles were pushed inside it, triggered the women to protest against the Army’s actions.

One of the leaders of the protest, Mary Yakubu, told the News Agency of Nigeria (NAN) that the water holds a cultural significance for the community and should not be tampered with.

“If the water is evacuated, it could lead to the death of our sons and husbands,” she claimed.

Another reason given for the protest was the alleged maltreatment of residents of the community by members of the task force who were accused of locking down the area and preventing anyone from entering or leaving.

The protest succeeded in forcing a Chinese construction company that was assisting the operation in drilling out water from the pond to withdraw their services due to continuous threats.

Around the time of the protest, the team recovered the detached door of an 18-Seater Hummer bus from the pond and redoubled its effort to drain the water.

A week later on September 29, the team finally pulled out a black Toyota Corolla car, with Kwara number plate ‘MUN-670AA’, from the pond.

It was the same car that Alkali was driving when he went missing. Shoes and clothes belonging to the retired military officer were also found in the retrieved vehicle.

The recovery of the car has led to speculations that Alkali, who retired from service on August 7, 2018, may have been killed or taken captive by criminal elements who must have driven his car into the pond.

More vehicles recovered from pond heightens tension in community
Since the draining of the pond started, many other vehicles have been pulled out, leading to speculation that it might have been a hotspot for criminals to hide evidence of their nefarious activities.