Therese Patricia Okoumou, the Black woman who scaled the Statue of Liberty, has said she was inspired to do what she did by Michelle Obama’s speech.

“When they go low, we go high,” Michelle Obama famously proclaimed at the 2016 Democratic National Convention. This is what Therese said inspired her to take the risk and climb high onto the Statue of Liberty.

She said on Thursday outside the Manhattan courthouse where she had been arraigned:

Michelle Obama — our beloved first lady that I care so much about — said, ‘When they go low, we go high,’ and I went as high as I could. 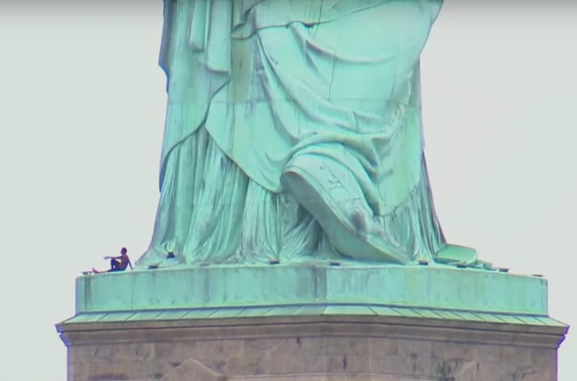 She was arrested on the Fourth of July after climbing the base of the Statue of Liberty to protest migrant family separation at the border with the group Rise and Resist.

Trump has wrecked this country apart.

I can say a lot of things about this monster, but I will stop at this: His draconian zero-tolerance policy on immigration has to go.

The Rise and Resist, organization with whom she had earlier protested with, initially distanced themselves from her.
They said, The person who climbed the Statue of Liberty was one of forty participants in our planned banner action, but her decision to climb the statue was made independently of the group, without consulting any other member of the group,” they said in a statement. “We understand and share her desire to see the immediate release of children from detention and reunion with their parents. We hope that her legal representation will arrange for her release under her own recognizance.”
Officers from the NYPD’s Emergency Service Unit transported Okoumou to a federal detention center. Her case is being handled by prosecutors in the Southern District of New York.

She will appear in Manhattan Federal Court on Thursday. She is expected to be charged with national park regulations or public use limit; trespassing; disorderly conduct, and interfering with government functions. All are federal misdemeanors.
The immigration activist, once filed a complaint with the New York City Commission on Human Rights, seeking a judicial review and reversal of a “determination” it made regarding alleged incidents of abuse that Okoumou suffered at the hands of a social services agency.
Statue of Liberty, Therese Patricia Okoumou