The 18-year-old broke the news on his Insta Stories, writing: ‘@blacchyna & I Are No Longer Together’. Later in the day, he deleted the post.

Chyna declined to publicly respond to this message, and the fourth finger of her left hand has been bare in the intervening time, which suggests either that the proposal was just for laughs or that she turned him down.

After reportedly being dumped by YBN Almighty Jay, it seems Blac Chyna has already moved on, as she recently posted and deleted a photo of boxer Devin Haney on Instagram.

The 31 year old former stripper has dated dozens of rappers, and dozens of athletes. And as she ages, she’s going for younger and younger men.

Chyna took to social media to announce their relationship. She posted a pic of her new bae – and the internet went wild. Some commenters praised Chyna for following her “cougar” heart. But others said that Rob’s baby mama was looking like a “thirsty old thot.”

Chyna added the caption “Hi babe @realdevinhaney,” and was met with a heart emoji from the boxer as a response. Take a look above. 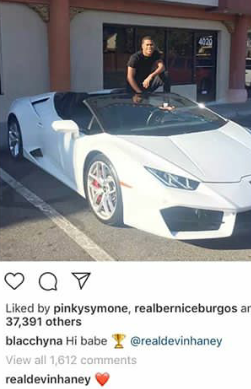 A source close to Jay told Radar that the single mom of two “freaked him out” when she started talking about their future and wanting to
have his children.

“She wanted a very serious relationship and started talking about wanting more kids with him,” the source claimed. “All that scared the hell out of him.