Football legend Diego Maradona is ready to take a drastic action after false rumours surfaced that he had died after watching Argentina play Nigeria on Tuesday.

According to Mail Online Sport, the 57-year-old has promised more than £8,000 through his lawyer to anyone who can help him unmask the man responsible for killing him off and forcing him to put out a statement confirming he was alive but had overdone it on the white wine.

The rumours emerged after Maradona was helped away from his VIP box and assisted by medical staff after seeing Argentina score a dramatic late goal against Nigeria to knock them out of the tournament. It was also claimed that he was later hospitalized. 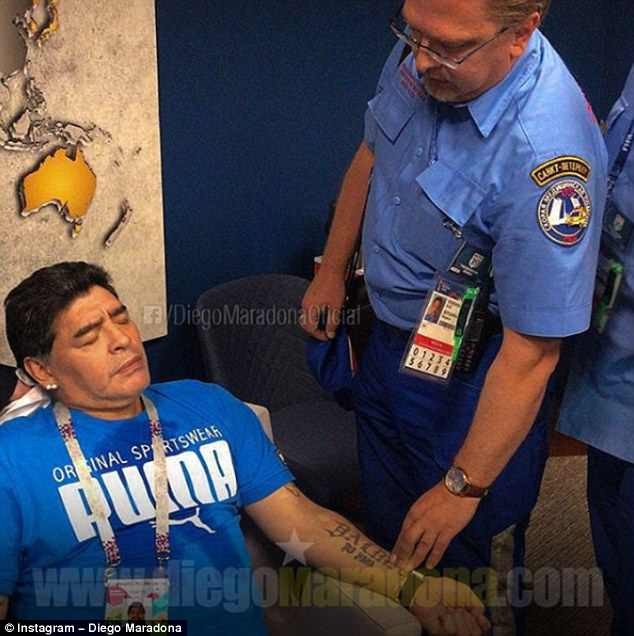 Shortly after the match, two Spanish-language recordings went viral, and it claimed the 57-year-old had suffered a fatal heart attack.

One said an adrenaline injection to his heart had failed to save him and the Argentinian squad were yet to be told he had passed away in hospital. A second 42-second recording, a WhatsApp message sent to a mystery man called Mati by someone passing himself off as an Argentinian sports journalist based in Russia, added: ‘They are only going to be announcing the news tomorrow. It’s a family decision.’ 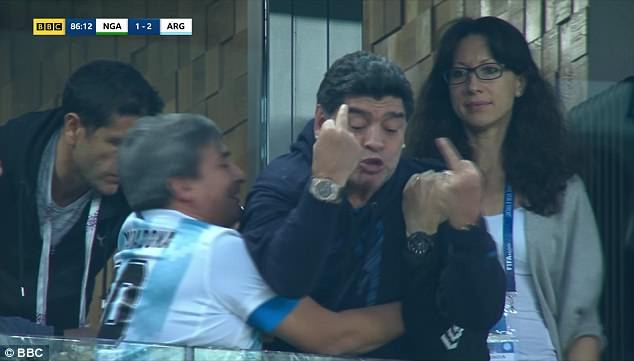 The football legend was forced to call his partner Rocio Oliva as he returned to Moscow on Wednesday morning to prove he was still alive and refute the heart attack reports.

In a statement by his lawyer, he confirmed they’ll take drastic action to unmask whoever was behind the false rumours.

‘But especially if there’s a financial incentive, someone who knows how something started often ends up revealing it and helping to unmask whoever was behind an atrocity like this.

‘It was a very long night. I was in Belarus for work reasons and helping to organise Diego’s travel arrangements.

‘But Maradona’s sisters heard the news and couldn’t contact me or their brother. One of them ended up collapsing.We can’t let things like this go unanswered.’

Maradona’s daughter Dalma also described the false rumours about her dad’s death as ‘miserable’ on Wednesday.

She wrote on Twitter: ‘I haven’t heard them but they told me what they said. They are false. There’s obviously some very twisted people out there.’Don’t help them go viral. If you do, you should know they tell lies.

Diego Maradona’s undignified behaviour and worse-for-wear appearance at Argentina’s win over Nigeria is losing him even more friends in his mother country.

Maradona reacted with predictable bombast after news of a reported hospital visit turned out to be exaggerated, but there was no apology for his unpleasant double one-finger gesture after Marcos Rojo’s late winner on Tuesday. It was not the first controversial incident involving Maradona at this World Cup and Fifa has noted its global ambassador’s undiplomatic behaviour, while Gary Lineker said the 57-year-old was “in danger of becoming a laughing stock”.