The plane, a Boeing 737-200 leased by state airline Cubana de Aviacion from a small Mexican carrier and operated by a Mexican crew, crashed near Jose Marti International Airport in Havana,killing over 100 of its 113 passengers and crew.

Boeing’s 737-200 first entered service in the United States in 1968 and was last manufactured 30 years ago.

Cuba’s newly sworn in president Miguel Diaz-Canel confirmed there was a ‘high number of casualties’ after the internal Cubana de Aviacion flight crashed into a yuca field near a high school, in the Santiago de las Vegas neighborhood, on Friday. Just three survivors have been recovered so far – all in critical condition, according to Cuban media.

The president said a commission would be formed to investigate the cause of the crash. He said there was no damage to homes in the area or casualties on the ground, and he thanked local residents for racing to the scene to help first responders. 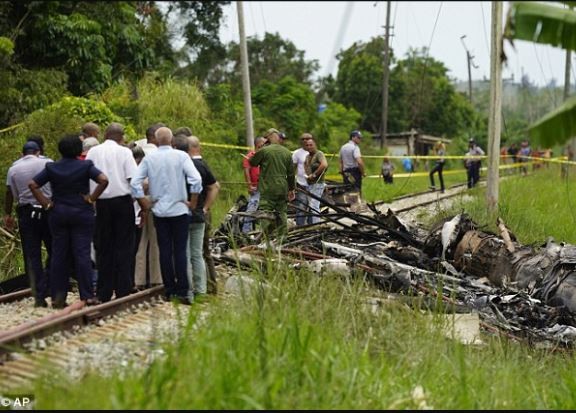 There were six Mexican crew members on board; the passengers were mainly Cuban, with five foreigners among them, state-run website Cubadebate reports.

“There has been an unfortunate aviation accident. The news is not very promising, it seems that there is a high number of victims,” Cuban President Miguel Diaz-Canel said after visiting the crash site.

Hospitals in the capital, including the General Calixto García University Hospital, are bracing themselves for the arrival of the survivors, Cuban state media Granma reports. Flight DMJ 0972, which was headed for the city of Holguin, in eastern Cuba, was carrying 104 passengers and nine crew when it crashed at 12.08pm local time.

The cause of the crash is not clear but witnesses at the airport terminal reported seeing a huge fireball followed by a giant plume of smoke rising in the distance. Diaz-Canel arrived at the scene shortly after the crash. ‘The news is not very promising, it seems that there is a high number of victims,’ he told AFP. 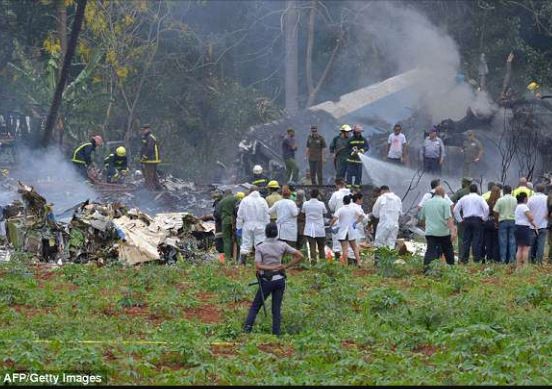 During take-off (the plane) apparently suffered a problem and dived to the ground,” said the Mexican transport department on its website.

“I saw it taking off,” supermarket worker Jose Luis told the AFP news agency. “All of a sudden, it made a turn, and went down. We were all amazed.”

Radio Havana Cuba said on Twitter that the plane crashed on the road between Boyeros and Havana, about 20km (12 miles) south of the capital. 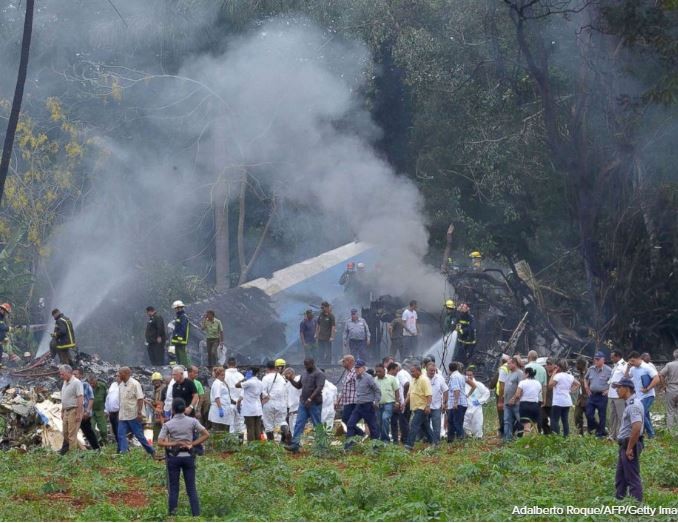 The U.S. State Department is working to confirm if there were any U.S. citizens on board. Argentina’s Foreign Ministry says two of the South American nation’s citizens died in Friday’s crash of a passenger jet in Cuba. A ministry statement says Argentina is “deeply shaken” by the deaths.Cuba’s national airline, Cubana de Aviacion, has been plagued with safety issues in recent years due to its aging fleet and only yesterday, more than a third of its fleet were officially grounded.

The company which has a fleet of 16 with an average age of almost ten years old received an order from the Cuban National Aviation Authority to ground its six An-158 aircraft due to ‘serious’ technical and safety issues including cracks and mechanical issues, according to Airline Geeks.