Kentucky Republican state lawmaker Dan Johnson shot himself on a bridge in Mount Washington, Kentucky, the Bullitt County sheriff, Donnie Tinnell, said. His body was found near a bridge on Greenwell Ford Road in Mount Washington, in a spot called the River Bottoms. He had a single gunshot wound to his head. A gun was recovered at the scene.

Officials discovered Johnson’s body after they were made aware of a concerning Facebook statement and tracked the besieged lawmaker’s phone to his location, Billings said.

Bullitt County Coroner Dave Billings said Johnson died of a single gunshot wound on Greenwell Ford Road in Mount Washington, Kentucky. Billings said Johnson stopped his car at the end of a bridge in a secluded area, then got out and walked to the front of the car. He said an autopsy is scheduled for Thursday morning.

“I would say it is probably suicide,” he said.

He refused to resign following allegations that he sexually assaulted a teenage girl in the basement of his home killed himself on Wednesday night.

Wednesday, Johnson posted a troubling message on his Facebook page. In the post, he asked people to care for his wife. He wrote that post-traumatic stress disorder “is a sickness that will take my life, I cannot handle it any longer. It has won this life, BUT HEAVEN IS MY HOME.”

The 57yrs old, was elected to the state legislature in 2016. Prior to the election, racist Facebook posts he made came to light. One compared Barack and Michelle Obama to monkeys. Republican leaders urged him to drop out of the race because of this but he refused and eventually won.

He was pastor of Heart of Fire church in Louisville and he sponsored a number of bills having to do with religious liberty and teaching the Bible in public schools. But he was mostly out of the spotlight until Monday, when the Kentucky Center for Investigative Reporting published an account from a woman saying Johnson sexually assaulted her in the basement of his home in 2013. The woman told police about the incident at the time and they investigated but closed the case and did not file charges.

The Lawmaker, held a news conference in the pulpit of his church, which he began by leading friends and family in singing a portion of the Christmas carol O Come All Ye Faithful. He said the allegations against him were “totally false” and that they were part of a nationwide strategy of defeating conservative Republicans. He gave an example of the former Republican US Senate candidate Roy Moore, who faces accusations of sexual misconduct from multiple women. 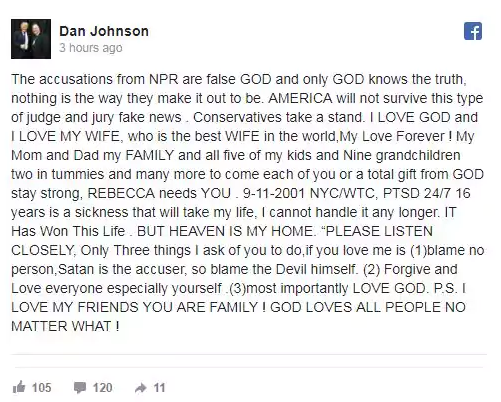 Officials discovered Johnson’s body after they were made aware of the Facebook post and they tracked Johnson’s phone to his location.The post appears to have been removed now.

Republican Gov. Matt Bevin posted on his Twitter account that “my heart breaks for his family tonight.”

“These are heavy days in Frankfort and in America,” Bevin posted. “May God indeed shed His grace on us all. … We sure need it.”