United States Secretary of Health and Human Services, Tom Price, has resigned following revelations that he had taken expensive private jet travel at the taxpayer’s expense to conduct official business.

Mr Price was already in hot water for Republicans’ several failed attempts to repeal and replace Obamacare, otherwise known as the Affordable Care Act. But his job as head of the administration’s Health and Human Services department began to be threatened following a slew of reports about his extensive use of charter aircraft.

He offered his resignation on Friday and the President accepted, a statement from Press Secretary Sarah Huckabee Sanders read.

On Thursday, Price cut a check for the costs he incurred. But he had chosen only to pay for the price of his seats on the plane (just under $52,000) and not the total cost of the trips themselves (which exceeded $1 million).

In a copy of his resignation letter posted to Twitter, Price thanked Trump for the “opportunity to serve the American people”.

“I have spent 40 years both as a doctor and public servant putting people first,” he wrote. “I regret that the recent events have created a distraction from those important objectives.”

“You may be rest assured that I will continue to support your critical priorities going ahead because failure is not an option for the American people,” he added. 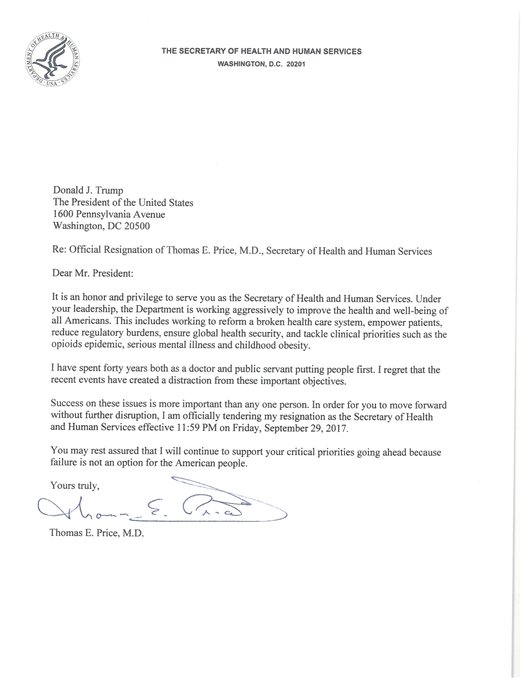 He had championed repeal legislation when he served in the House of Representatives. But he was notably distant from the debate while at HHS—an absence that reportedly irritated President Trump.

“The President intends to designate Don J. Wright of Virginia to serve as Acting Secretary, effective at 11:59 p.m. on September 29, 2017. Mr. Wright currently serves as the Deputy Assistant Secretary for Health and Director of the Office of Disease Prevention and Health Promotion.” a statement reads.

According to Politico, Mr Price racked up at least $400,000 in travel bills for chartered flights, undermining Mr Trump’s campaign promise to “drain the swamp”.

Mr Trump reportedly feared these revelations undercut his promise to expel everything his supporters hated about Washington: lobbying, corruption and entitled bureaucrats.

On Thursday, Mr Price had apparently tried to defuse the President’s anger by agreeing to reimburse the government $51,887 for his past use of private jets. However, that didn’t appear to work.

Speaking less than an hour before the resignation was announced, Trump bemoaned the optics of the matter, which he said obscured what otherwise had been a cost-saving tenure.
“I was disappointed because I didn’t like it, cosmetically or otherwise. I was disappointed,” Trump said.
Price and his aides have insisted that the trips he took by private charter jet had been approved through the usual legal and ethics offices at HHS. But the appearance of a millionaire Cabinet secretary flying routes easily navigated by far cheaper means proved an optics nightmare for an administration already accused of being out of touch with regular Americans.
The White House said this week it was examining whether to adopt stricter oversight of Cabinet secretaries’ travel plans.
The first sign of Trump’s ire emerged on Wednesday, when he said only “we’ll see” after being asked if he was planning to fire Price. Neither Trump nor his top aides could say in the following days whether Price retained the President’s confidence.
Departing the White House on Friday, Trump called Price a “very fine man” who had nonetheless made a grave mistake.
“He better get them. Oh, he better,” Trump said. “Otherwise I’ll say, ‘Tom, you’re fired.’ “
Price didn’t get the votes, but it was his use of private aircraft that ultimately led to his demise in the Trump administration.
Politico first reported Price’s use of charter jets for official business last week and found that the secretary has traveled on charter flights at least 24 times since May, citing people familiar with his travel plans and a review of HHS documents.
Charter plane operators estimated 24 flights would have cost $400,000, Politico reported. Commercial trips would have cost thousands of dollars less. The Health and Human Services inspector general is reviewing whether the means of travel was appropriate.
“This is an administration that saves hundreds of millions of dollars on renegotiating things,” Trump said. “So I don’t like to see somebody that perhaps there’s the perception that it wasn’t right.”
The resignation was announced as Trump flew aboard Air Force One for another weekend at his golf club in New Jersey. Stepping off his own plane, Trump offered a thumbs-up sign when reporters asked if he’d accepted Price’s resignation.
Price himself offered a rosy picture of his future on Thursday evening, telling CNN that he “absolutely” planned to stay on as health secretary — a claim that was ultimately not meant to be.
Advertisements
Tom Price, United States