A 34-year-old Nigerian man accused of importing 10 kilograms of drug ice inside three fish statues, told ACT Supreme Court today August 23, that two men threatened to destroy him if he didn’t take the haul to Sydney. 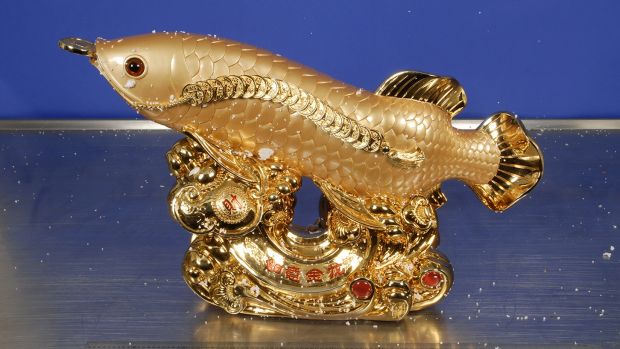 Police found broken pieces of the statue in a green wheelie bin beside a Kaleen house after they intercepted the package and arrested Jackson Igwebuike moments before he boarded a Murrays bus bound for Sydney in 2015.

Igwebuike pleaded not guilty to importing a commercial quantity of a border controlled drug and is on trial in the ACT Supreme Court.

He claimed that he thought he was helping a friend a friend’s decor business. When he realised what was happening he became “petrified” and unable to back out, after threats were made against him and his wife, who was in Nigeria.

“They have ruined my life. I can’t get even get a job” Igwebuike told the court.

Igwebuike said he was helped by the friend when he came to Australia to study. He said he agreed to collect the fish statues for the man, which had been delivered to a Canberra address, and take them to Sydney.

But the court heard before Igwebuike left for Sydney, two men who had been involved in the arrangements came and broke the fish open.
Inside the statues were bags wrapped in black tape, which the men allegedly told Igwebuike to take to Sydney.

Igwebuike said he expressed concern about transporting the bags because he did not know their contents. But he said one of the men lifted his shirt to show he had a gun and then brought out a phone to show him a picture of his wife in Nigeria.

“I was petrified.” he said.

Commonwealth prosecutor Caroline Dobraszczyk? said in her opening address the drugs were discovered when three 20 kilogram statues that arrived in a shipping crate from China were x-rayed by Border Force officers at Port Botany on October 8.

Officers opened up one statue of a fish and discovered 43 packages filled with a white crystalline substance and wrapped in duct tape. Forensic tests revealed the packets contained a combined total of 10.58 kilograms of methamphetamine, with the pure amount weighing about 8.47 kilograms.

Igwebuike rejected suggestions from prosecutors that he made up the story about the two men and he was in control of the process.

The case is expected to wind up tomorrow, August 24.

Hakeem Balogun, the Chargé d’affaires of the Embassy of Nigeria in Washington, says different reasons are responsible for the extreme vetting Nigerians face during entry…

The Federal Commissioner, Hajia Sadiya Umar Farouq, in a statement, said it is unfortunate that Cameroon has continued forceful return of Nigerian refugees even after…

The Nigeria government and France have agreed to continue to deepen the buoyant diplomatic, economic and military relationships between the two countries. This was the…

The Elder Statesman, Tanko Yakasai has wished President Buhari “good luck” if he wishes to seek for second term in office as Nigeria President. The…

As United States and North Korea continue to struggle it out on ballistic missile test,N.korea has accused the Australian Government of “blindly and zealously toeing…

Nigerian comic artist who allegedly duped a number of banks out of more than $100,000 faced a federal judge last Friday, April 21, after being…