Abati said ‘Buhari’s reunion with his media team’, Abati said while the visits may be part of the doctors’ therapy, “it is ridiculous and insensitive that government officials are now visiting the President in medical exile, with some of them posing for photo-ops with their children.

“Our President should not be turned into a tourist attraction and the Abuja House in London should not become a museum.”
 
Abati said he was excited at the media team’s visit to Buhari him in London, adding that he felt sorry for them for not having adequate access to Buhari.

“I had always felt that the exclusion of the media team from the London medical vacation and the various visits practically undermined the Presidential media office, and created the space for the mismanagement of the communication process around and about the President’s illness.

“I could never have imagined my own boss in our time, travelling without me or shutting me out of any important event. He took my team everywhere. I thought it was wrong to have kept President Buhari’s team out of the London trips.

“The core team should have been there all the time to take photographs, issue statements, if needed, organize video recordings, liaise with local journalists, and manage “inconvenient” journalism and public perception. But what did we have?

“The various pictures taken of the President until the visit by his media team, looked like photos taken by quacks. The President was presented as if he was a statue, or at best, as a sick man propped up for photographic effect. Nobody even paid attention to his wardrobe.

“Whoever was behind that newspaper vendor style of journalism did the President a disservice. The real damage was that Nigerians did not believe the official narrative, they concluded that the pictures were photo-shopped or that they were old pictures and that there was an attempt to hoodwink the public.

“But the game changed the day Bayo Omoboriowo accompanied seven governors to London to see the President. With five pictures, the President’s official photographer showed him in better light. The photographs presented him as a living being.”
Copied

A Dry Sallah & Other Stories by Reuben Abati

Obasanjo blast Buhari:voice out on Biafra,” state governors are more powerful than the president” 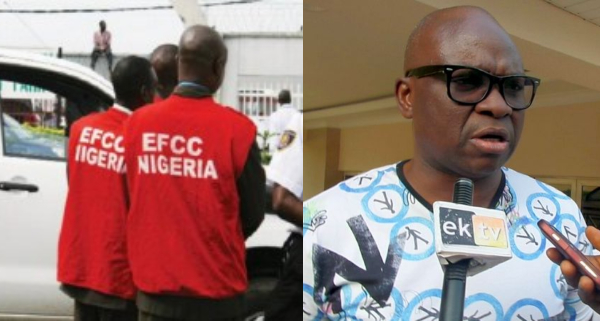 EFCC asks customs to place Fayose on watch list,to prevent him from traveling out of Nigeria