Wizkid has signed a new deal with RCA Records which to happens to be an American record label owned by Sony Music Entertainment, a subsidiary of Sony Corporation of America, Inc.
See Photo Below : 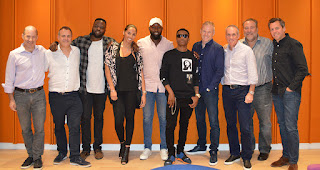 The singer who got on to Sony Music Entertainment in 2016, has finally sealed a deal their subsidiary, RCA Records.
This deal comes after his exploits on Drake’s Hot 100-topping hit “One Dance” (which he co-wrote and co-produced).

In His Words:
“It’s hard for me to describe what I do, since I work with rhythms from Afro-Beat, reggae, hip-hop, dance hall and others,” WizKid told Billboard in a statement. “What’s important to me is for music to be real, authentic, raw and timeless. I don’t wanna be boxed in to any one genre.”

RCA Records chairman and CEO Peter Edge added: “We are thrilled to welcome WizKid to the RCA Records family. He has become a superstar in the African music scene and will be a game-changer in bringing African music to the world. We are extremely excited to have him as a part of RCA and are eager for the journey ahead.”

“We couldn’t be more excited to welcome WizKid to the Sony Music family,” said Sony Music International president of Northern & Eastern Europe and Africa Adam Granite in a statement.

“This is an incredibly important signing as we look to make Africa a major source of repertoire for the world. Wiz is a key ambassador for this movement and we look forward to helping him conquer the globe.”