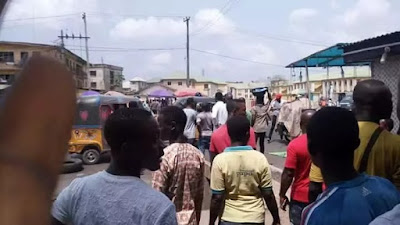 The conflict began when the Airforce officer, who is right now in the hosptal, came to make use of the Automated Teller Machine,{ATM} however one of the cops guarding the bank professedly opposed him.Says Eyewitness

Be that as it may, this did not run down well with Airforce officer, who in his military camouflage opposed the police quickly.

This led to an argument which aggravated into a fight. In the process, the police officer allegedly shot the military officer.

It was gathered that the colleague of the shot Airforce officer regrouped and immediately stormed the bank premises, leading to a free for all fight and shooting by the police officers and the Airforce personnel.

The shot Airforce officer was rushed to the hospital, where he was said to be recuperating, while First Bank branch where the incident occurred was shut down immediately, as armed policemen cordoned off the area.

Taiwo Lakanu, Imo state commissioner of police, said that he had yet to be briefed about the incident, when contacted for comments.