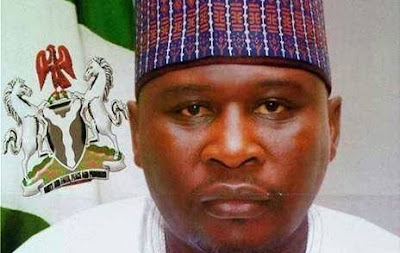 The Federal High Court, Abuja, on Thursday adjourned the trial of a former acting governor of Adamawa State, Ahmadu Fintiri, to May 3 as the first prosecution witness billed for cross-examination could not make it to court for health reasons.says Justice A. R. Mohammed

The witness, Ibrahim Andrew, who testified at the last sitting (January 26) was to be cross examined by the defence counsel, but he was absent in court.
Larry Aso, counsel to the EFCC, told the court that the witness was unavoidably absent for reasons beyond his control.
He, however, applied for an adjournment and promised that the witness would be in court at the next adjourned date.

The former Acting Governor Mr. Fintiri’s counsel, M. A. Magaji, did not oppose the application for an adjournment.
Justice A. R. Mohammed adjourned to May 3 for cross examination.
Mr. Fintiri was arraigned on June 30, 2016 alongside Mayim Construction and Properties Limited for laundering money to the tune of N2.9 billion through his naira and dollar accounts domiciled at Ecobank Plc.
He was also arraigned for making large cash payment for the purchase of a property at plot 7, Gana Str., Maitama, Abuja, when he held sway as the acting governor of the state.