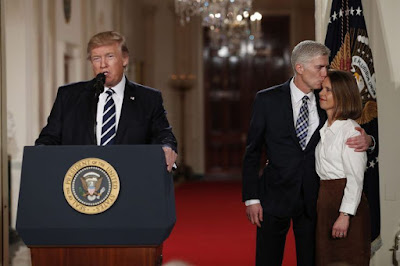 President Trump announced Tuesday night that Neil Gorsuch, a conservative federal judge on the 10th U.S. Circuit Court of Appeals in Denver, is his pick to fill the vacancy left by the death of Justice Antonin Scalia.

“When Justice Scalia passed away suddenly last February, I made a promise to the American people,” Trump said in announcing his choice inside the East Room of the White House in Washington, D.C. “If I were elected president, I would find the very best judge in the country for the Supreme Court.”

“I took the task of this nomination very seriously. I have selected an individual whose qualities define, really and I mean closely define, what we’re looking for,” Trump continued. “Judge Gorsuch has outstanding legal skills, a brilliant mind, tremendous discipline and has earned bipartisan support.”

“This has been the most transparent and most important Supreme Court selection process in the history of our country, and I wanted the American people to have a voice in this nomination,” Trump added. “Judge Gorsuch has a superb intellect, an unparalleled legal education, and a commitment to interpreting the Constitution according to its text. He will make an incredible justice as soon as the Senate confirms him.”

“As this process now moves to the Senate, I look forward to speaking with members from both sides of the aisle, from answering their questions to hearing their concerns,” Gorsuch said. “I consider the United States Senate the greatest deliberative body in the world. … It is the role of judges to apply, not alter, the work for the people’s representatives.”

Gorsuch, a Colorado native with an Ivy League pedigree, is seen as a relatively safe pick by legal observers, primarily because his “originalist” views on the Constitution are very much in line with those of Scalia.

“Both his pre-judicial résumé and his body of work as a judge make him a natural fit for an appointment to the Supreme Court by a Republican president,” SCOTUSblog notes. “He is relatively young, and his background is filled with sterling legal and academic credentials.”

The 49-year-old Gorsuch is the youngest Supreme Court nominee in about 25 years.

Gorsuch studied as an undergraduate at Columbia University, earned his law degree at Harvard as a classmate of Obama and obtained a doctorate in legal philosophy at Oxford University, where he studied as a Marshall Scholar.

He clerked for two U.S. Supreme Court justices — Byron White and Anthony Kennedy — before spending a decade as a partner at the law firm of Kellogg, Huber, Hansen, Todd, Evans & Figel in Washington, D.C., where his specialties ranged “from antitrust to securities fraud, fiduciary duty to telecommunications,” according to his official bio.

In 2006, Gorsuch was nominated by President George W. Bush to serve on the 10th U.S. Circuit Court of Appeals. His nomination was confirmed by the Senate in a unanimous voice vote.

Gorsuch is the son of Anne Burford, who was the head of the Environmental Protection Agency under President Ronald Reagan the first time the Republicans tried to dismantle it.

Burford, the first female head of the EPA, was forced to quit after she refused to turn over Superfund records to Congress.

He lives with his wife and two daughters in Boulder, Colo., where he is a visiting professor at the University of Colorado’s law school. He is also a member of the Federalist Society, a conservative and libertarian group that promotes an “originalist interpretation of the U.S. Constitution.”

Gorsuch was on the long list of potential Supreme Court nominees Trump released before the election.

According to the Washington Post, Gorsuch was a “natural” choice given his “family connection to Republican establishment politics,” his “glittery Ivy League résumé” and his Supreme Court clerkship.
University of Denver law professor Justin Marceau called Gorsuch “a predictably socially conservative judge who tends to favor state power over federal power.”

Gorsuch wrote a 2006 book, “The Future of Assisted Suicide and Euthanasia,” arguing against assisted-suicide laws.

Perhaps most importantly, Gorsuch is like Scalia in many ways.

“He is celebrated as a keen legal thinker and a particularly incisive legal writer, with a flair that matches — or at least evokes — that of the justice whose seat he would be nominated to fill,” SCOTUSblog commented. “In fact, some of the parallels can be downright eerie.”

Gorsuch’s opinions are exceptionally clear and routinely entertaining; he is an unusual pleasure to read, and it is always plain exactly what he thinks and why. Like Scalia, Gorsuch also seems to have a set of judicial/ideological commitments apart from his personal policy preferences that drive his decision-making. He is an ardent textualist (like Scalia); he believes criminal laws should be clear and interpreted in favor of defendants even if that hurts government prosecutions (like Scalia); he is skeptical of efforts to purge religious expression from public spaces (like Scalia); he is highly dubious of legislative history (like Scalia); and he is less than enamored of the dormant commerce clause (like Scalia).

If confirmed, Marceau said, we would see in Gorsuch “a judge who, while perhaps not as combative in personal style as Justice Scalia, is perhaps his intellectual equal.”

“Sometimes people are described as lions of their profession, and I have difficulty understanding exactly what that’s supposed to mean,” Gorsuch said. “Not so with Justice Scalia. He really was a lion of the law: docile in private life but a ferocious fighter when at work, with a roar that could echo for miles.”