Few weeks after Nicki Minaj ended her relationship with, Meek Mill, she has made peace with her longtime friend, Drake. According to TMZ, Drake flew to Miami for a meeting with Nicki Minaj and Lil Wayne. 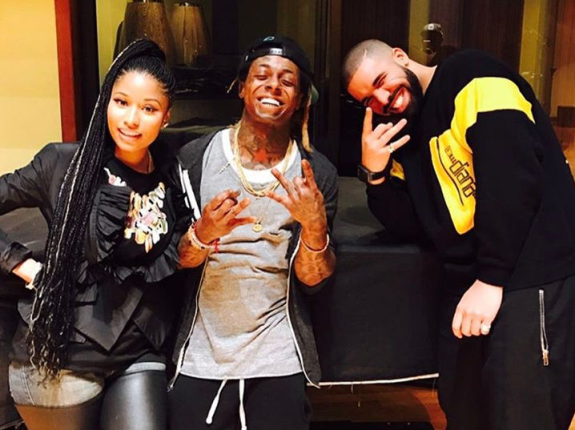 Nicki Minaj and Drake have ended the cold war that lasted more than 2 years. Nicki posted a photo of herself and Drake Wednesday morning … with no caption, but we know what went down before they squashed the beef.

Our Young Money sources tell us Drake saw an ESPN segment on January 8 that featured Lil Wayne and Nicki. Drake immediately called label honcho Mack Maine, and said … “Why didn’t you tell me the family is back?” Mack quickly set up a meeting for the full Young Money roster that turned into a peace summit.

We’re told Drake hopped on a jet to Miami on January 12, and sat down with Nicki and Wayne. The photo she posted was taken during that meeting. Remember … Drake and Nicki haven’t spoken since they recorded “Truffle Butter” in 2014.

She purposely stayed on the sidelines during his beef with then bf Meek Mill. Nicki announced their split on Jan. 5 — one week later she was chopping it up with Drake, and we’re told everything’s cool between the labelmates now.

As Drake said, “I don’t wanna hear about this ever again. Not even when she tell him they’re better as friends.”