President Donald Trump’s first Supreme Court nomination was presented as prime-time drama. And before the big reveal, it involved a circuitous drive over the back roads of Colorado, a secret military flight, a judge being chased through Pennsylvania.

The media frenzy and secret missions came to an end Tuesday night when Trump announced his decision to nominate Judge Neil Gorsuch to the nation’s highest court.

The new president tapped Gorsuch to fill the seat that was left vacant when Justice Antonin Scalia died last February. Members of Scalia’s family were in attendance when Trump introduced Gorsuch in the East Room of the White House, and the president repeatedly invoked the late justice’s legacy of staunch conservatism.


“When Justice Scalia passed away suddenly last February, I made a promise to the American people,” Trump said. “If I were elected president, I would find the very best judge in the country for the Supreme Court.”

That judge, Trump announced, was Gorsuch, a Coloradan who serves on the 10th Circuit Court of Appeals in Denver. Gorsuch was on a list of 21 potential Supreme Court picks that Trump unveiled during his presidential campaign last year, a lineup that was largely assembled by the conservative Federalist Society and Heritage Foundation. Speaking to reporters in the East Room after the announcement, White House Press Secretary Sean Spicer said the president also relied on input from his chief of staff Reince Priebus, White House Counsel Don McGahn, and his chief strategist Steve Bannon.

“Don McGahn obviously shepherded this process,” Spicer said. “His team, the vice president, Reince Priebus and Steve Bannon were all people that were really . . . instrumental.”

Trump’s advisers weren’t the only ones who helped him with the Supreme Court pick. He was only able to nominate Gorsuch because Senate Republicans blocked former President Barack Obama’s nominee, Merrick Garland, from having any confirmation hearings or vote on his nomination for nearly 300 days until Obama left office.

According to Yahoo News, Several Republican senators were in the room when Trump announced his choice and one of them, Sen. Ted Cruz (R-Texas) believes they “absolutely” did the right thing.
“This election was a referendum on the Supreme Court, on the direction it would go, whether it would be filled by a judge who would honor the Constitution or filled by a liberal judicial activist,” Cruz said. “And no vacancy that’s occurred in an election year has been filled in 80 years. I think the choice was given to we the people, and we the people spoke overwhelmingly that we want the Constitution honored. We want our fundamental liberties protected.”

Some Democrats have cited the obstruction of Garland as a reason to fight Gorsuch’s confirmation. However, Trump’s team is confident they will get the votes they need on Capitol Hill for Gorsuch to join the court, even if 60 votes are required to break a Democratic filibuster on the nomination.

“He’s got an amazing record, and he’s an amazing person,” Spicer said of Gorsuch. “I think when members of the Senate Judiciary Committee, members of the United States Senate, and the American people get to see what a fine jurist he is and what a fine individual he is, he will be resoundingly confirmed.”

In a phone call with reporters after the announcement, a White House official praised Gorsuch’s past legal opinions, asserting that he follows the letter of the law rather than his personal beliefs. The official cited a handful of opinions as evidence of Gorsuch’s legal perspective, including one where he ruled in favor of an undocumented immigrant who was seeking lawful status. In that case, Gorsuch questioned the so-called “Chevron doctrine,” a legal principle that judges should defer to executive agencies’ interpretations of the law.

Along with this ruling, the official also pointed to a trio of Gorsuch’s opinions on religious issues. In one, Gorsuch argued that a Native American prisoner needed access to a sweat lodge for religious observances, while in another he sided with an order of religious sisters who wanted to be exempted from providing insurance coverage for birth control to their employees.

According to Spicer, Trump initially whittled his list of 21 potential Supreme Court justices down to six, and then four – Gorsuch, Thomas Hardiman, William Pryor, and Amul Thapar – who were interviewed by Trump.

On Tuesday, in the hours leading up to Trump’s announcement, rumors about the Supreme Court pick flew around the capital. Multiple media outlets reported that Trump was deciding between Gorsuch and Hardiman, leading reporters to follow Hardiman as he drove through his home state of Pennsylvania. A CNN producer spotted Hardiman at a gas station more than 100 miles east of his home, driving speculation that he was en route to Washington, D.C. 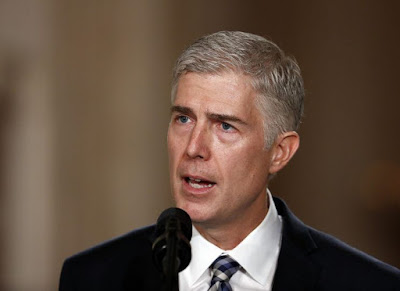 After the announcement, Spicer said he believed Hardiman was meeting with another Pennsylvania judge and hadn’t ever left the Keystone State. During his first ten days in office, Trump and his staff have feuded with the press, and Spicer used this opportunity to tweak the media.

“Because of the speculation, I checked on this. He was visiting with the chief justice of the Third District of Pennsylvania,” Spicer said, adding, “I’ve heard several people report that he was sighted in D.C. I’d be very interested in that, because to the best of my knowledge, there’s a little bit of a buffer between Pennsylvania and the District of Columbia, at least on the maps I use. So that may be one of those alternative facts.”

There were also reports – fueled by Trump’s reality show background – that the president might borrow from his television show “The Apprentice” and have both Hardiman and Gorsuch present for the broadcast. In the end, the East Room announcement was a far more traditional political affair. When Yahoo News asked Spicer whether the president’s decision to have the event broadcast live in primetime reflected his love of showmanship, the press secretary argued the announcement was no different from “previous nominations.”

“Look, if you go back and look at previous nominations, we followed the tradition that existed,” said Spicer.

However, Spicer was incorrect. None of President Obama’s Supreme Court nomination announcements were made in primetime. Obama introduced Garland, Justice Sonia Sotomayor, and Justice Elena Kagan in daytime ceremonies.

There were clearly some theatrics involved in the rollout of Gorsuch as Trump’s nominee. Spicer described drastic measures taken to keep the identity of the nominee secret up until Trump’s announcement. He said Trump called Gorsuch on Monday to inform him of the decision, and that after the call, Gorsuch and his wife went to a neighbor’s home. White House staff then flew to Colorado to prepare Gorsuch and escort him to D.C. Spicer said the staffers drove Gorsuch via a “back farm road” and took him to a military jet bound for the capital, where he stayed at a private home on the evening of the announcement.

“You saw a very well planned out and executed strategy tonight,” Spicer said, clearly relieved after what has been a rocky start for this White House. “It was a great effort by the entire team.”

Another White House source underlined the fact that Trump wanted to execute the announcement with some panache.

“We couldn’t just do the same old thing!” the source said.