Ali Baba -If the homes & hiding places of ex govt officials are raided across this country, I bet over $10 billion will be recovered’ 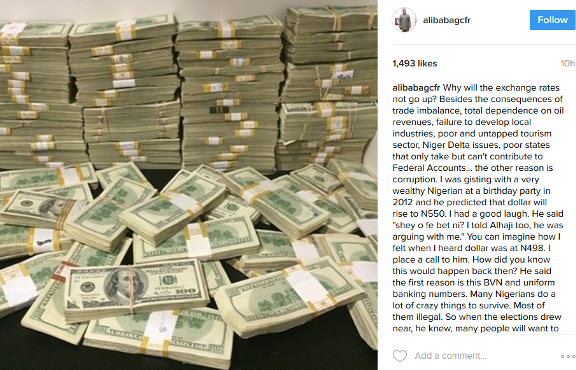 Why will the exchange rates not go up? Besides the consequences of trade imbalance, total dependence on oil revenues, failure to develop local industries, poor and untapped tourism sector, Niger Delta issues, poor states that only take but can’t contribute to Federal Accounts… the other reason is corruption.

I was gisting with a very wealthy Nigerian at a birthday party in 2012 and he predicted that dollar will rise to N550. I had a good laugh. He said “shey o fe bet ni? I told Alhaji too, he was arguing with me.” You can imagine how I felt when I heard dollar was at N498. I place a call to him.

How did you know this would happen back then? He said the first reason is this BVN and uniform banking numbers. Many Nigerians do a lot of crazy things to survive. Most of them illegal. So when the elections drew near, he knew, many people will want to move cash around, buy loyalty, pay for electioneering. With all the extra monitoring of accounts and owners of same. So what is the solution? Dollar. Ok lets say the SouthWest chairman (just as example oooo) says he wants 40m, how do you give him that amount of money? Can’t be The naira. Dollar to the rescue.

Kickbacks on contracts, bribes and diverted funds can only be moved around in dollar currency. Judges, election officials, political god father return on investment… none of these transactions can be documented through banking transactions. And as the scarcity was driving up the rates, the TSA dealt a blow to government organizations that were earning in dollars. So there you have it. If the homes and hiding places of ex government officials are raided across this country, I bet over 10 billion dollars will be recovered. Easy. Then there are those who get official rates, sell, make a good margin and allow others to do the same, then wait for the next allocation. Nigeria has a long journey. But you know shebi I am an ordinary comedian, what do I know sef!