Four US states are suing the Trump administration over the president’s executive order banning refugees and travelers from a list of predominantly Muslim countries from entering America. 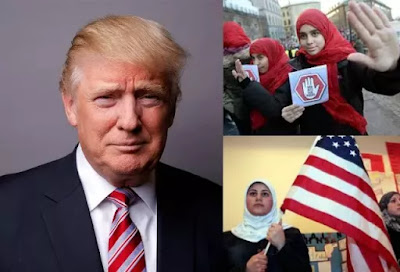 Washington was the first state to sue Trump, followed by New York, Massachusetts and Virginia over the travel ban that caused chaos at airports in those states and beyond at the weekend as people with valid immigration documents were detained or deported after arriving on flights from overseas.

According to The Guardian, On Tuesday, New York filed a federal lawsuit against Trump’s executive order brought by the American Civil Liberties Union Foundation, the Urban Justice Center and others.

Washington became the first state to sue the White House on Monday. Online retail behemoth Amazon, which is headquartered in Washington, pledged support.

The state of Virginia filed a federal lawsuit filed over an incident on Saturday where two Yemeni brothers arrived at Dulles airport from east Africa with residency green cards, planning to join their father in Michigan, but were blocked by agents enforcing the travel ban and put on a flight back the way they had come.

The lawsuit seeks to restore the immigration rights of the brothers and up to 60 others whom lawyers say suffered a similar fate at Dulles at the weekend.

Virginia lawsuit is claiming the enforcement of the executive order in general is unlawful and threatens the “health and well-being, both physical and economic” of its residents, and its public universities and colleges in particular.

Massachusetts attorney general Maura Healey said the state was also filing its own case seeking to have the ban struck down.

Healey said: “The executive order is harmful, discriminatory and unconstitutional. It discriminates on the basis of religion and national origin.”

Obama’s statement reads: “President Obama is heartened by the level of engagement taking place in communities around the country. In his final official speech as president, he spoke about the important role of citizen and how all Americans have a responsibility to be the guardians of our democracy — not just during an election but every day.

“Citizens exercising their constitutional right to assemble, organize and have their voices heard by their elected officials is exactly what we expect to see when American values are at stake.”