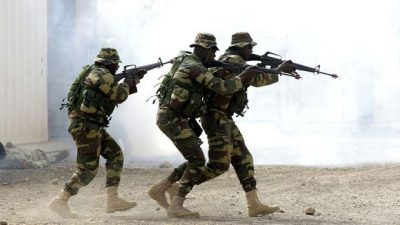 Hours after new Gambian president, Adama Barrow was sworn into office on Tgursday, the whereabouts of former president of Gambia, Yahya Jammeh has remained unknown. Jammeh disappeared as military forces of the Economic Community of West African States (ECOWAS) entered the country from Senegal.According to resident Abdoulie Bah, long convoys of military vehicles with armed soldiers entered the country through the border town of Karang.
The troops are expected to search for long-term ruler Yahya Jammeh, who refused to give up power after losing the Dec. 1, 2016 presidential election to Barrow.Barrow’s inauguration came after an escalating political standoff triggered by Jammeh’s rejection of the election results.During his inaugural speech, Barrow asked Gambia’s security forces to remain loyal to the constitution and commanded all soldiers to remain in their barracks. Armed soldiers found outside their barracks would be regarded as “rebels,” the newly sworn-in president said. Jammeh’s whereabouts is still unknown.Source: African Press Agency