As promised by the Russian government, a plane has landed at the Dulles International Airport in Virginia, to transport the 35 Russian diplomats and their families, who were expelled by President Obama for their alleged meddling in the presidential election, back to their country.
The aircraft was spotted at the airport in Sterling, just outside of Washington, DC, on Saturday.

The FBI and the Department of Homeland Security determined in a report released Thursday that Russian state actors were behind computer hacks this year that exposed some of the Democratic National Committee’s secrets. 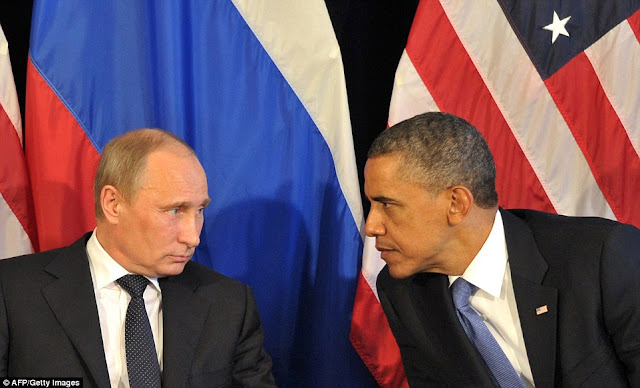 Evidence is strong, the FBI and DHS concluded, tying Russia to the DNC hack, which unmasked an intra-party plot to promote Hillary Clinton’s primary candidacy while marginalizing her main opponent, Senator Bernie Sanders. The report makes no reference, however, to the more explosive leaks of emails hacked from the personal account of Clinton campaign chairman John Podesta.

The 13-page document’s main purpose is to educate government and political IT professionals about how to protect their computer systems from future cyber attacks. But its most volatile statements concern intelligence findings that establish the involvement of Russian military and civilian intelligence agencies in past hacking. Those services found ways to ‘compromise and exploit networks and endpoints associated with the US election, as well as a range of U.S. Government, political, and private sector entities,’ Thursday’s report concludes.

The two agencies had already released a statement in October attributing the attacks to Russia, claiming they were an attempt to ‘interfere’ with America’s presidential election.The new report does not expand on that specific allegation or provide new evidence to support it.

The two main Russian entities identified on Thursday include a hacking group known as APT29, tied to Russia’s Federal Security Service – the FSB, one of several successor agencies to the infamous KGB which Russian President Vladimir Putin once led. That group is thought to have infiltrated the DBC’s computers for more than a year, pulling out documents regularly.

The FBI and DHS tied another group of hackers, known as APT28, to Russia’s military intelligence service, known as the GRU. Some security experts have written that APT28 was the entity behind the hack of Podesta’s emails, but Thursday’s report is silent on that claim. APT28, The Hill reported Thursday, is thought to be the responsible for providing stolen files and emails from both hacking operations to WikiLeaks, which published them online.

The attackers, the two U.S. intelligence agencies reported, executed ‘spearphishing’ operations that lured computer users to click on links inside emails which led to malicious addresses. Some of those online destinations fed malware into the victims’ computers, which then allowed the code to migrate into the DNC’s servers, providing the hackers with long-term access. The result, the FBI and DHS concluded, was ‘the exfiltration of information from multiple senior party members.’

‘The U.S. Government assesses that information was leaked to the press and publicly disclosed,’ the report declares.
And some Russian intelligence operatives, the agencies write, continued to launch cyber attacks as recently as ‘just days after’ the November 8 election. 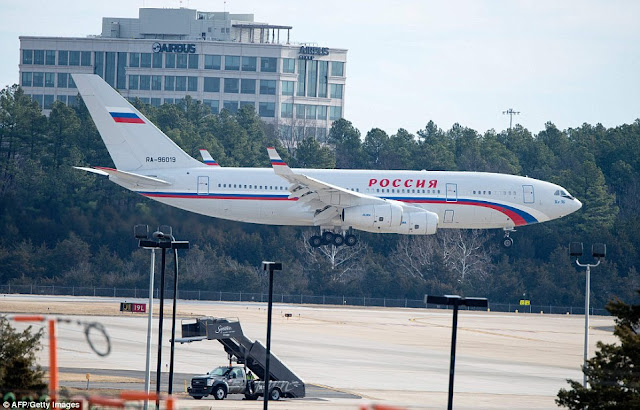 The special flight arrived to pickup the Russian diplomats from across the country who were labeled ‘persona non grata’ by Obama and given 72 hours to leave the US.

U-Haul trucks were seen pulling up to the aircraft as it was packed down with the diplomats’ belongings.
Crews worked to pack the truck loads of boxes onto the plane.

The Kremlin addressed the expulsion on Friday and said they would send the plane to the US to pick up the expelled diplomats, ensuring that they are out of the country by Obama’s New Year’s Day deadline.
In their announcement on Twitter, the Kremlin included a picture of the Rossiya Special Flight Squadron aircraft that landed in Virginia.

The plane, an Ilyushin Il-96, is part of the fleet of aircraft which ferry Russian President Vladimir Putin, his ministers and senior politicians around Russia and beyond.

Earlier on Saturday, Russian officials revealed that one of the diplomats from the consulate in California is a chef.
In a Facebook post by the Consulate General of Russia in San Francisco, dozens of the expelled diplomats and their families were expected to ‘fly back to Russia on Saturday’.
A photo of the last dinner for some of the diplomats was posted on Facebook with the caption: ‘It’s so difficult to remain diplomatic… but we will.’
The consulate also called Obama’s expulsion of the diplomats in Washington, DC, and San Francisco, ‘bizarre and ridiculous’ and mentioned that one of the expelled individuals is a chef, who ‘will be leaving with his wife and two-year old son’.
‘We strongly condemn the unfriendly and completely unjustified step taken by the outgoing US administration,’ officials from the consulate wrote. 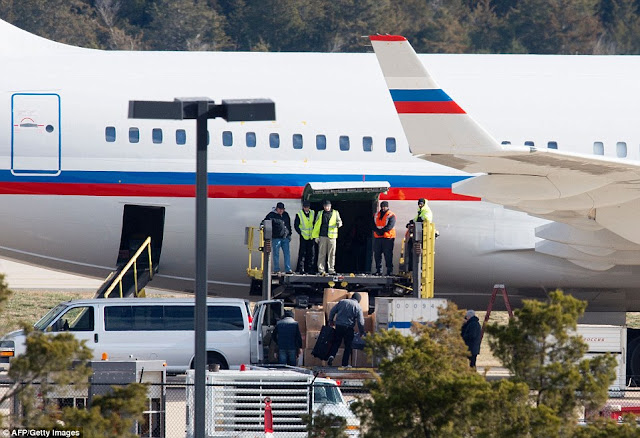 Two of the Russian country clubs, one in New York and the other in Maryland, were also shut down by noon on Friday.
One of the country clubs that was vacated shortly after Obama’s announcement was the Upper Brookville home, also known as Elmcroft, in Long Island.

It was shut down after Obama said he would be closing a Russian compound in New York that had been used for intelligence gathering.

‘The premises have now been vacated,’ Village Mayor Elliot Conway said after at least eight vehicles with diplomatic plates departed the upscale North Shore village.
The Gold Coast estate, once called Elmcroft, was purchased by the Soviets in 1950s.

It was initially believed that the Killenworth compound, which is in Glen Cove, Long Island, was the target in New York.

Obama gave the government until noon on Friday to get out of the compounds – which he said were used for spying – before the State Department took custody of the residences.

But Glen Cove Mayor Reggie Spinello said Friday that Killenworth was not being closed down by the government and instead it was the Brookville retreat, which is located on Long Island’s exclusive North Shore.

‘For years, it’s basically been a facility just for the caretakers. They take care of the facility,’ Spinello said. ‘The people there use our beaches, our parks. They are very quiet people, they fly under the radar.’

There was heavy traffic in and out of both estates, Elmcroft and Killenworth, before the deadline on Friday. The compound in Maryland is located along the Corsica River in Centerville.

Reports indicate that the 45-acre Maryland retreat was bought by the former Soviet Union in 1972 and historically served as a recreational getaway for its diplomats seeking a respite from the diplomatic whirl in nearby Washington, DC.
Previous reports stated that some of the diplomats were having a hard time booking travel out of the US at the last minute and during the holiday season.

As he ordered the airlift, Putin also mocked Obama by declining to carry out tit-for-tat expulsions of US diplomats and instead inviting their children to a holiday party at the Kremlin – as well as saying he would wait for Donald Trump to become president before deciding what to do next.

Putin’s officials launched a tirade of abuse at Obama and his administration, calling them ‘angry and shallow brained losers’, while a senior member of the Russian parliament called the president a ‘political corpse’. The expulsion of the 35 diplomats isn’t the only part of Obama’s new round of sanctions.