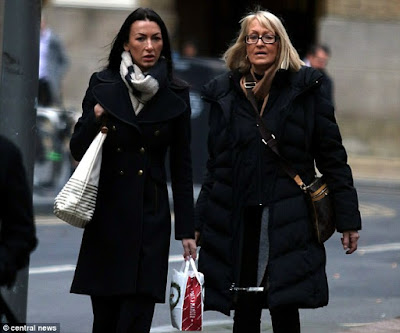 Dianne Moorcroft, 62, changed her name by deed poll to convince estate agents and solicitors she was Margaret Gwenllian Richards, 85, the owner of a vacant £3m house in Kensington.

Moorcroft’s daughter, Dubai-based stable owner and model Laylah De Cruz, 31, encouraged her mother to take part in the fraud at the insistence of her ‘playboy’ lover Karl Cronin.

She posed as a millionairess to pull off an ‘audacious’ property scam is facing jail with her model daughter after they were both convicted of fraud.

The gang secured a £1.2m bridging loan against the house before a buyer was found and they immediately transferred the money to Dubai.

After deliberating for eight and a half hours, a jury of seven women and five men found Moorcroft and De Cruz guilty of conspiracy to commit fraud by a majority of 10-2.
Neither the blonde haired, bespectacled mother or her dark haired daughter reacted as they were told they warned they both face jail.

A British passport and Dubai resident’s permit in Ms Richards’ name were obtained to get a tenancy for the property and then arrange for its sale while the real owner was living in Cambridge.

Neither the blonde haired, bespectacled mother or her dark haired daughter reacted as they were told they warned they both face jail.

Moorcroft admitted she impersonated Ms Richards but went along with it because she wanted to help her daughter out after Cronin paid off a debt of £161,000 for De Cruz in Dubai.

Cronin, 50, is thought to be responsible for defrauding Fulham and Chelsea landlords of more than £5m, and is still wanted by police eight years after a Crimewatch appeal.
He is known to have used 11 aliases and targeted estate agents by claiming to be the owner of rented properties on which the mortgage had been fully paid.

He would then remortgage the properties, take the cash and leave the rightful owner with the bill.
Earlier prosecutor Teresa Hay said: ‘The fraud itself was as simple as it was audacious.

‘Moorcroft would not have become involved in this scam at all if it weren’t for the involvement and encouragement of her daughter.

‘The roles they played respectively in the grand scheme were relatively small but they were hugely significant in the success of the scam.’

It was transferred to a bank account she had set up in Dubai on the same day after the land registry suspected a fraud on October 27, 2014.

Police began investigating in January 2015 and discovered there were only two people in the UK named Margaret Gwenllian Richards.

Moorcroft was arrested at her home in Blackpool in February 2015 and gave a no comment interview.

De Cruz was arrested in May 2016 after travelling to the UK from Dubai and also declined to answer questions.
Jurors heard the conspiracy also involved a man purporting to be Mrs Richards’ son Mark, who was also not before the court.

To allay some doubts Moorcroft was having De Cruz told her mother Cronin would increase her original cut of £30,000 to £100,000.

Jurors were shown a social media Whatsapp message from De Cruz to Moorcroft which read: ‘It’s easier plus it’s 100,000 for you.’

Ms Hay said silver tongued Cronin ‘was communicating with both ladies’, and ‘someone else must have been involved in the fraud in the UK’.

Moorcroft said she travelled to Dubai on three occasions so Cronin could open a bank account in Ms Richard’s name and complete the sale of two properties.

She claimed she believed Cronin was asking her to impersonate Mrs Richards with the consent of her family and ‘didn’t think he was asking me to do anything illegal at the time’.

Moorcroft, of Blackpool, and De Cruz, who currently lives in Dubai, were both convicted of one count of conspiracy to commit fraud between July 1 and October 31, 2014.

Judge Jones had earlier directed the jury to find Moorcroft not guilty of a further charge of possession of an identity document with improper intent.

Mother and daughter were bailed ahead of sentence on 10 March.