Reality star Kim  Kardashian, 36, was woken at 2.35am on October 3,2016 as she slept in her luxury Paris apartment

She described how masked thugs grabbed her and took her out to the entry hall. The alleged mastermind behind the robbery has been charged, according to a French prosecutor.

She described the moment she lost £8.5m worth of jewels in a Paris robbery was published today for the first time.

The 36-year-old reality TV star told officers that she ‘heard a noise at the door’ and ‘shouted out’ but no one answered.

She described how masked thugs grabbed her and took her out to the entry hall. She said: ‘I was in a bathrobe, naked underneath. We went back to the bedroom and they pushed me onto the bed.’

The statement release comes as the full names of the alleged gang members behind the robbery were made public, and Ms Kardashian prepared to travel to France to give evidence against them.

The mother-of-two was in a state of severe shock when she was quizzed for an hour from 4.30am by detectives on October 3 last year.

Less than two hours earlier five men broke into her central Paris apartment where she was sleeping alone after a fashion week dinner on a Sunday night.

She added that she called her bodyguard at 2.56am and saw trough her sliding doors two people arrive with a male reception who was tied up.

The concierge was Mr Abdulrahman, 39, who was forced to take the gang to the flat at gunpoint.

Police arrested 17 people over the robbery on Monday, including two brothers in their 50s accused of disposing of a $4m engagement ring. Two men are pictured being arrested during the dawn raids

Ms Kardashian said: ‘Both men were hooded, one had a ski mask and he had a cap and a jacket with ‘Police’ on it.
‘The second man had the same ‘Police’ clothes, but did not have any ski mask. The man with the ski glasses was about 1.7m (5ft 6in), thin, black trousers, black boots.

‘The second man, also European, was taller and he stayed with the security guard. He was around 1.8 (5ft 9ins) and was dressed in the same way as his accomplice. It was the one with the ski mask who stayed with me.’

Aomar Ait Khedache, a 60-year-old nicknamed ‘Old Omar’ and Didier Dubreucq, 60, and dubbed ‘Blue Eyes’ have been arrested on suspicion of robbery. 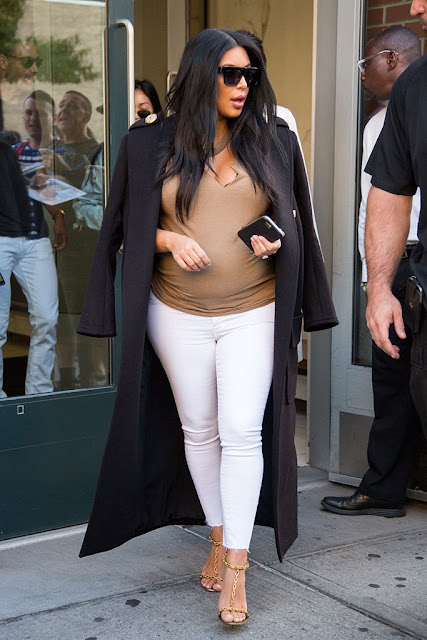 Referring to one of the men, Ms Kardashian said: ‘He had a strong French accent and asked me for my ring [In English] He looked at what was on the bedside table. It was worth 4m dollars.’

Following repeated requests to produce her diamond engagement ring, Kim replied: ‘I replied that I didn’t know, he took out a gun and I showed him the ring.

‘He had gloves. He asked me where the jewels and the money were. He grabbed me and took me out to the entry hall. I was in a bathrobe, naked underneath.

‘We then went back to the bedroom and they pushed me onto the bed. And at that point they tied me up and put plastic cables and scotch tap on my hands, and then taped my mouth and my legs. They took me to my bathroom, more specifically in my bathtub.

‘I forgot to tell you that when they pushed me onto the bed, they went to my purse and emptied everything. In my jewellery box there were two Cartier diamond bracelets, a Jacob necklace in gold inlaid with diamonds, earrings with diamonds by Loraine Schwarz, and others by Yanina.

Ms Kardashian continued: ‘Then they ran away. During the theft, they had the hotel’s mobile phone that did not stop ringing, and they spoke in French.

‘I got the impression they were saying they had to leave. Then I succeeded in pulling off the tape from my hands and my mouth. I guessed that they were a bit inexperienced in the manner in which they had tied me up.’
Asked if she was would recognise the attackers, Ms Kardashian said: ‘Perhaps the small one, with the ski mask, but I’m not sure.’

‘Are you hurt?’, officers asked, and she replied’No’. She said she wanted to make a legal complaint, adding:’I want to leave, and go back to my children in the USA. A private plane is waiting for me at Bourget’.

Aomar Ait Khedache and Didier Dubreucq are both now in custody and face prison sentences after being charged with a range of offences including armed robbery.

Ait Khedache is said to have admitted his involvement in the well organised heist after his DNA was found on ties used on Ms Kardashian’s wrists.

Kim posted this image of her engagement ring on Instagram before it was stolen in the robbery
His son, Harminy Ait Khedache, 27, is thought to have driven one of the gang’s getaway cars, and is one of eight others also charged.

Also charged are Pierre Bouainère, a 72-year-old career gangster, and a woman decribed as Christiane, 70, who was the regular girlfriend of Aomar Ait Khedache.

Another suspect who has admitted his involvement is Yunice Abas, a 63-year-old who is said to have dropped a piece of jewellery as the gang escaped on bicycles.