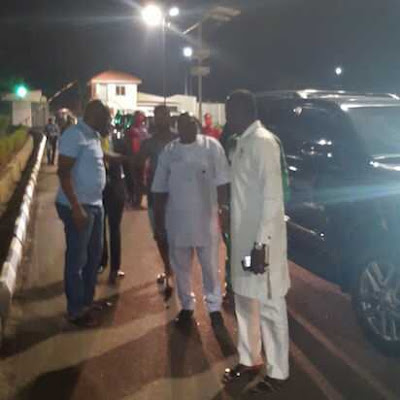 Ekiti State Governor and Chairman of the People’s Democratic Party (PDP) Governors’s Forum, Ayodele Fayose, in the early morning on Wednesday foiled an attempt by operatives of the Department of State Services (DSS) from arresting Apostle Johnson Suleiman of The Omega Fire Ministries Worldwide in Ado Ekiti.

According to Vanguard report, the Pastor was in Ado Ekiti for a two-day crusade that was also attended by Gov. Fayose and he was trailed after paying a courtesy visit to the governor at the Government House. He was trailed to his hotel room by the operatives of the DSS who almost forced their way into his room but were resisted by security men of the hotel that insisted on knowing their mission.

The Pastor was then reportedly alerted and he called Governor Fayose who personally led a rescue mission to prevent his arrest and took him to safety.

Senior Pastor of Omega Fire Ministries (OFM) Worldwide, Apostle Johnson Suleiman, has said that if he spends one day with security operatives, every Nigerian embassy in the 42 countries where the church has branches will be in trouble.

Suleiman made this known at the Ekiti State Government House, after Governor Ayo Fayose foiled an attempt by operatives of the Department of State Services (DSS) to arrest him at the hotel he was lodged after a crusade he held in the state.

He said that he has over 500,000 members in Nigeria, adding that spending one day with security operatives will cause a damage (in Nigeria), that will take “one year to repair”

The attempted arrest came on the heels of a video that circulated on social media where the clergyman told his congregation to “kill any Fulani Herdsman” found within the church premises.