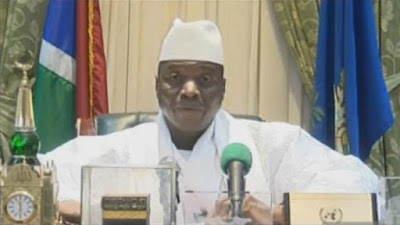 Gambia: Yahya Jammeh has declared a state of emergency, just one days before he is supposed to cede power after losing elections last month.

In a national TV address, Jammeh said on Tuesday the measure was necessary because of “the unprecedented and extraordinary amount of foreign interference” in a December 1 presidential vote, which he lost to opposition leader Adama Barrow.

The announcement of the state of emergency came hours after Gambia’s ministers for finance, foreign affairs, trade and the environment resigned from Jammeh’s government.

Jammeh also cited external interference in “the internal affairs of The Gambia and the unwarranted hostile atmosphere threatening the sovereignty, peace, security and stability of the country”.

The state of emergency, which is supposed to last 90 days, bans “acts of disobdience” and “acts intended to disturb public order”

“The decision to declare a state of emergency was taken by the national parliament, but the only people who are sitting in parliament are the members of Jammeh’s political party,” Al Jazeera’s Nicolas Haque, reporting from neighbouring Senegal’s capital, Dakar, said.

Haque said the declaration of the state of emergency raised concerns about freedom of speech and arbitraty arrests in the country, as well as the potential implementation of a curfew and the closure of borders.

“Gambia, as of right now, is effectively on lockdown,” Haque said.

“What is clear is that the state of emergency is supposed to last 90 days, which entails that Jammeh wants to stay in power beyond Thursday’s inauguration.”

“There’s been a lot of diplomatic and military activity and preparations ahead of the deadline given to Jammeh to leave office.”

“Military and diplomatic sources in Abuja say they are not overthrowing Jammeh,” Al Jazeera’s Ahmed Idris, reporting from the Nigerian capital, said, “but are enforcing the mandate of ECOWAS and the African Union, as well as ensuring that the choice of the Gambian people is realised at the end of Jammeh’s term.