The nation’s 44th president has chosen to spend the first days of his newfound retirement playing golf and hitting the gym at Thunderbird Country Club in Rancho Mirage, California.

Former President Barack Obama looked to be in deep thought as he headed home from a workout, escorted by his smallest motorcade in years.

The former president stopped for a break during the round and was seen eating a sandwich while sat in his cart on a sunny day in the Coachella Valley.

Used to being in control, Obama chose to drive his own golf cart rather than have an aide ferry him between holes.
Just two days after leaving the White House, Obama is in the Palm Springs area on vacation.

The world-class private golf course in Rancho Mirage is one of the desert’s best-kept golfing secrets and rests against a mountain backdrop with a stunning rugged landscape.

The course is owned by Oracle billionaire Larry Ellison and membership is by invitation only.

Golf Digest once ranked it as one of the top 20 golf courses in California. 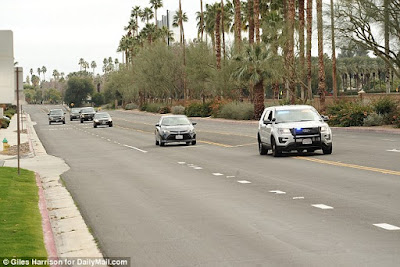 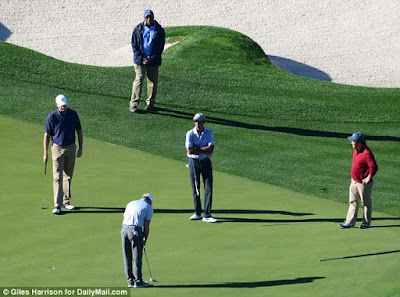 About the only way to see the golf course is to hike Mountain Park or the Bump and Grind Trail in Rancho Mirage, which overlooks the private estate.

Obama played at Porcupine Creek in February this year and back in 2014 he was spotted there during another visit to the desert to meet with King Abdullah II of Jordan.

After President Donald Trump’s inauguration in Washington on Friday Obama bade farewell to the White House and boarded a helicopter to travel to Joint Base Andrews in Prince George’s County, Maryland.

From there he flew to California on the presidential jet, SAM 28000 (Special Air Mission) – which is not called Air Force One unless the serving President is on board.
The plane circled Palm Springs International airport for more than 20 minutes and it’s believed the pilot made three attempts to land. 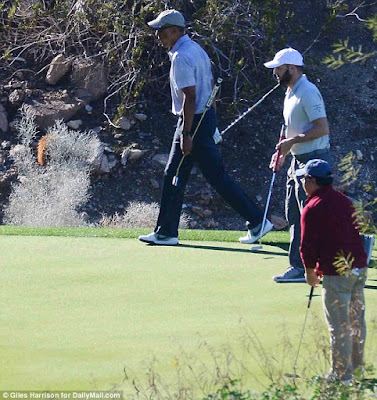 But as heavy rain and low cloud swept across the airport visibility was poor.

The former president was instead flown to March Air Force base some 44 miles away where his motorcade was diverted to meet him.