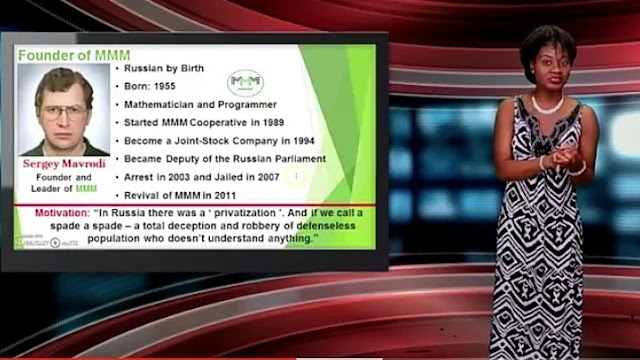 МММ was a Russian company that perpetrated one of the world’s largest Ponzi schemes of all time, in the 1990s. By different estimates from 5 to 40 million people lost up to $10 billion.

The exact figures are not known even to the founders. It was shut down by Russian police in 1994, declared bankruptcy in 1997.

While Nigerians are still waiting for regainging an acess to their Mavrodi Mondial Movement (MMM) accounts that were frozen for about a month, local reporters and journalists keep investigating the facts about the Ponzi scheme and its founder.

Recently, Nigerian popular journalist Adeola Fayehun with her team have digged out some information about a controversial scheme that will give you food for thought.

In 2011, MMM re-opened as “MMM Global” with up to 110 subsidiaries per country, it became widely popular in various African countries like South Africa , Nigeria , Zimbabwe, Ghana and Kenya.