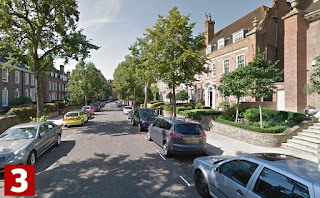 The most expensive street in the country has been revealed as Eaton Square in London, where the average house price is an eye-watering £16million.

The square is full of beautiful houses and apartments with white stucco facades that have been home to many famous residents over the years, including prime ministers Margaret Thatcher and Neville Chamberlain, as well as James Bond actors Sean Connery and Roger Moore.

It overlooks 2.5 hectares of private garden square – with many properties selling for far more than the £16,944,000 average. A seven-bedroom terrace house in the exclusive location is currently on the market for sale for £55million.

All of the top 10 most expensive places to live – with the exception of Poole, in Dorset, ranked in tenth place – are in London’s boroughs of Kensington or Westminster, or in the affluent area of Weybridge, in Surrey.

These include Grosvenor Crescent, in Westminster, with an average price of £16,918,000. The street was named the most expensive place to live two years ago in the annual survey by Lloyds Bank.

In the North East the majority of the most expensive streets are located in Newcastle, with Runnymede Road ,at £1,103,000 and Elmfield Park, at £1,081,000, leading the way.
In the West Midlands, Farquhar Road, in Edgbaston, at £1,434,000 and Ladywood Road, in Sutton Coldfield, at £1,302,000 are the two priciest addresses.
Ling Lane in Leeds has the most expensive homes in Yorkshire and the Humber at £1,319,000, while Warren Hill, in Newtown Linford, in Leicester, is the most expensive street in the East Midlands with an average price of £1,288,000