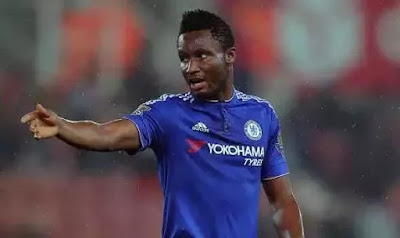 Chelsea midfielder John Obi Mikel as the Super Eagles captain is yet to kick the ball for the Blues this season.

There has been serious talks and arguments by pundits surrounding the future of Mikel Obi.

The 29-year-old has always been on the talk of transfer controversies and here we look at four outstanding clubs he might join should he consider leaving Chelsea.

Some Nigerians are of the opinion that Mikel’s lack of playing time under Chelsea manager could be a blessing for the Super Eagles who are looking for a ticket to the 2018 World Cup in Russia.

From the Point of view Mikel might likely go to following club.

On April 29, 2005, Manchester United announced that it has struck a deal with the Norwegian club Lyn Oslo to sign Mikel Obi, but the player disclosed amid the controversy between United and Chelsea that he was under duress to sign the contract with United without his agent present.
After all the controversies, Chelsea later got the signature of Mikel Obi under coach Jose Mourinho.

The Portuguese tactician is now the coach of Manchester United and the Nigerian star might be considering to reunite with his former boss at Old Trafford.

Italian giants Napoli have been hounding to sign Mikel since the year 2013 and it would be recalled how Rafa Benitez wanted to snap the Nigerian star who was struggling then to break into the Chelsea first team.

Napoli are still much interested to sign him and a first team shirt would be sure should he consider leaving the Blues.

Shanghai Shenhau is one of the Chinese top clubs that have been trying to bring top super stars to come and play in the country.

Nigerian striker Obafemi Martins signed for this club in a multi million dollar deal joining Senegalese striker Demba Ba who also had a stint at Chelsea
Going by the lack of playing times of John Obi Mikel at Chelsea, Shanghai Shenhau would be interested to snap him up should Mikel show interest of playing in the China.

Besiktas is Turkish club being rumoured to be planning a mega move for the Eagles captain whose contract comes to an end next summer.

Having not played a single competitive game for the Blues under new manager Antonio Conte, Mikel could now look to leave Stamford Bridge when the next transfer window opens.