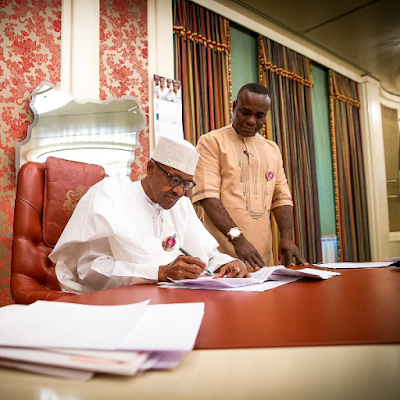 Senator Ita Enang, the Senior Special Assistant to the President on National Assembly Matters (Senate), made this known that President Muhammadu Buhari has assented to the ‎Endangered Species Control of International Trade and Traffic Amendment Act 2016, earlier passed by the National Assembly. while briefing State House correspondents on Friday in Abuja.

Enang said that ‎the Act was one of the 10 bills forwarded by the National Assembly to the President, adding that with the approval, the President had completed work on all the bills sent to him for his consent.

“The President has assented to the bill sent by the National Assembly, The Endangered Species (Control of International Trade and Traffic) Amendment Act 2016.

The intent of this amendment is to bring the penalty provisions in line with economic realities and to act as a deterrent or deter people from trafficking and trading in endangered species because endangered are preserved of the country,’’ Enang said.

The Presidential aide said the intent of the amendment was to bring the penalty provisions in line with economic realities and to serve as a deterrent to people trafficking in endangered species “because endangered species are the preserves of the country”.

He added that with the assent, the President had increased the penalties for violations of the provisions in line with today’s realities.

With the signing of the Act, President Buhari had so far signed 17 bills into law in 2016.

Commenting on the signed bills, the Senate President, Bukola Saraki, who had earlier met with the President behind closed door, assured that more progressive bills would be passed by the National Assembly in the coming years.

“It shows in part, what we have been able to do in the National Assembly and there are many more bills to come and the President is also responding to it. You are going to see more of that in 2017, there are a lot of bills lined up. For us in the Senate for example, in the last session just this last three months we did much more than what we did in the entire year. The National Assembly is settling down and as such you will see much more bill passed for the President to sign,” Saraki said.