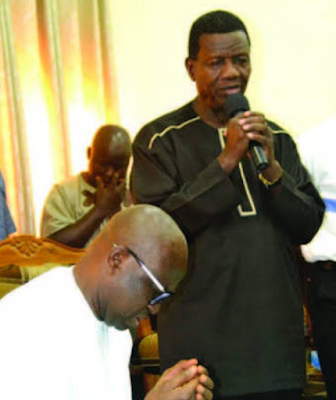 Nigerian Tribune reports that Pastor Adeboye hailed Fayose’s constant protection of the interest of his people by always standing up for them.

Pastor Adeboye, who stated this at the palace of Oba Rufus Adejugbe Aladesanmi 111, the Ewi of Ado-Ekiti in Ekiti state during a visit on Saturday, December 24, also called on other governors in Nigeria to imbibe Fayose’s way of standing up for his people.

Pastor Adeboye described Governor Fayose as “a great defender of his people and their cause.”

Your Excellency, we thank God for your life, courage, boldness and being willing to take the risk so that your people can be protected and I know you know what I am talking about.
You can be sure that we are praying for you and you will succeed.‎ I hope other governors will stand for their people like you and defend their people and say enough is enough‎.
Speaking earlier, Fayose expressed great joy at Pastor Adeboye’s presence in the state.

‎We ‎know that it is at this time of the year that you go round and we pray that God strengthens you.

Your visit is annually and when a man of God passes by, we want to take that advantage for him to bless us.‎ We appreciate your efforts at taking the gospel round the world‎.
Nigerian Tribune reports that Pastor Adeboye later held a revival at the Oluyemi Kayode stadium and later visited Ilawe and Ogotun-Ekiti in Ekiti South-West Local Government Area of the state.

Fayose is largely considered to be a very strong-willed and combative governor who is often at loggerheads with the federal government, the ruling party and so many others.

He was however well-praised after becoming the first state to institute the Ekiti anti-grazing law to protect residents from attacks by Fulani herdsmen.

Meanwhile, the All Progressives Congress (APC), Ekiti State chapter on Sunday alleged that the cleric may have been bribed by the governor to speak good of him.

According to PREMIUM TIMES, a statement signed by the state chairman of the party, Jide Awe, said that the party was alarmed that a cleric of Adeboye’s standing could praise Governor Fayose inspite of his persistent insults and abuses on President Muhammadu Buhari.

Awe added that the fact that Adeboye made the statement during the period when Christ’s birth is celebrated is to say the least, preposterous. 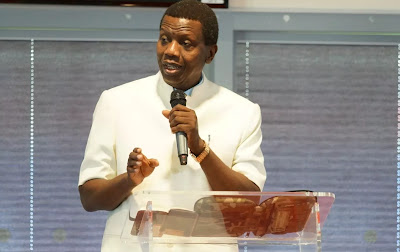 He warned that Adeboye should be careful of Fayose, who he (Awe) said could bribe even an angel of God to endorse the devil.

Awe also called on RCCG members and families of the church’s founder Josiah Akindayomi, to call Adeboye to order, adding that he might destroy the church by involving in politics.

He said that since the country’s Vice President, Yemi Osinbajo, is a Senior Pastor, in RCCG, Adeboye should support him (Osinbajo), and not praise Governor Fayose.