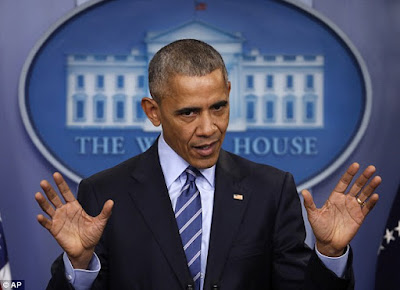 President Obama launched a Cold War strike on the Kremlin and its spies on Thursday, accusing them of hacking the presidential election on orders from Vladimir Putin.

Obama all but named the Russian strongman in his statement – saying hacking was ‘ordered at the highest level’.
That prompted an angry response from the Kremlin which promised an ‘appropriate’ retaliation – while its London embassy tweeted a picture mocking him as a ‘lame duck’.

He ordered 35 Russian intelligence operatives to leave the country as part of sanctions ordered for what he said where the country’s attempts to ‘interfere with democratic governance’ and harassment of U.S. diplomatic officials in Russia.
And he launched a scathing attack on Putin’s Kremlin in an official announcement of sanctions over allegations of hacking in the run-up to the presidential elections. 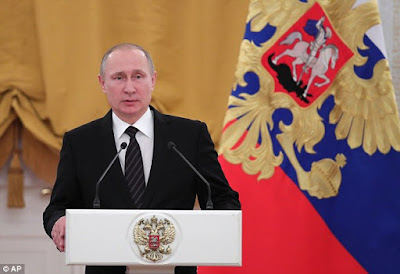 Donald Trump took four hours to react – and did not say if he had been briefed in advance.
‘It’s time for our country to move on to bigger and better things,’ he said in a statement.

‘Nevertheless, in the interest of our country and its great people, I will meet with leaders of the intelligence community next week in order to be updated on the facts of this situation.’ 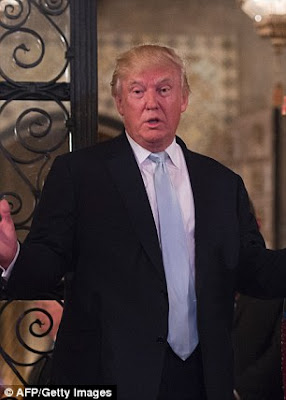 The White House says Russia hacked the emails, and Clinton has claimed Putin acted out because of a ‘personal beef.’
Wikileaks has denied Moscow was the source.
‘This is not in question. There’s no debate within the U.S. administration about the fact,’ a senior U.S. official said Thursday, ‘that Russia interfered in our democratic election. We’ve established that clearly to our satisfaction

‘I would never expect Russia to come out with their hands up and acknowledge what they did. They don’t do that…They still deny that they are intervening in Eastern Ukraine.
Continuing the official said, ‘We don’t see this as a he-said, she-said situation. We see this as there are facts, and then there are things that Russia says.’
Thirty-five Russian operatives were declared ‘persona non grata’ in a Cold War-style move that is likely to be followed by tit-for-tat action by the Kremlin. The Russians that were personally targeted have 72 hours to leave the country and must be gone by Sunday.

Other sanctions include revealing in public exactly what technical information the Department of Homeland Security and the FBI hold on Russian hacking capabilities – something which will embarrass the Kremlin and make it easier for their targets to take precaution. 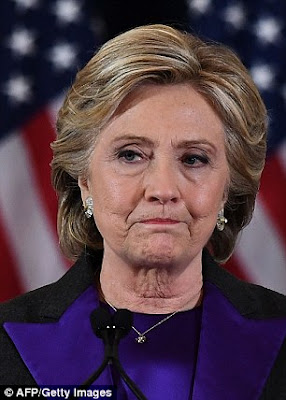 Obama also approved the shut down of two Russian compounds, one in New York and one in Maryland, which he said had been used for intelligence-related purposes.

And he introduced financial sanctions on the two Russian spy agencies, the GRU and the FSB, four named GRU officers, and three companies said to have provided ‘material support’ for the GRU’s hacking.
Government officials warned that convert actions were on their way, too.

‘This is not the sum total of everything that we are doing in response to Russia’s actions,’ a senior official said. ‘As President Obama and others have said some of those actions will be public and some of them will not….that should not be mistaken for the sum total of our response.’
Obama linked the sanctions to hacking which saw the Democratic Party’s secrets revealed as it tried to get Hillary Clinton elected – and to ‘an unacceptable level of harassment’ of American diplomats in Moscow by police and security services.