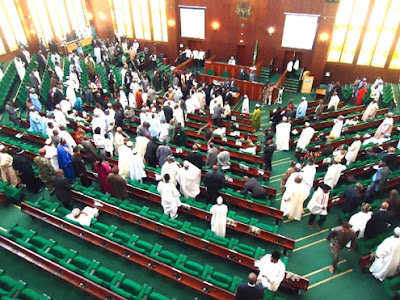 The bill, seeks to grant the control of revenues derived from mineral resources domiciled in the states to their various governments,on Wednesday passed through second reading

The House of Representatives seeks to grant the control of revenues derived from mineral resources domiciled in the states The bills is sponsored by the minority leader, Hon. Leo Ogor (PDP-Delta), was unanimously adopted by members through a voice vote.

According to the Green Chamber, the Bill is titled: “A bill for an Act to alter the constitution of the Federal Republic of Nigeria, 1999, to vest the control of the revenues derived from minerals, mineral oils, natural gas in, under or upon any land in the states of the federation and for other related Matters”.

Leading the debate, Ogor said that the bill, if passed into law, would give impetus to the quest to diversify the  economy, as states would focus on areas of comparative advantage.

He noted that every state in the country was endowed with one natural resources or the other, noting that if these resources were well harnessed, it would make the states less dependent on federal allocations.

According to Ogor, if the bill is passed into law, it will help the country function better as a federation.

“We are confronted with a situation where states go cap in hand every month to Abuja for federal allocation. When states take up resources in their areas, it will lead to specialisation. The exclusive legislative list is over crowded,” Ogor said.

“If it is passed into law, it would help to enhance the economy of the country and pull the nation out of recession. We need to take practical steps to see that we end this recession. We will not be able to end the recession, if states continue to come to Abuja to collect money.”

However, Hon. Sadiq Ibrahim (APC- Adawawa), citing order 13 (3), argued that according to the provisions of the House standing orders and rules, the bill should not have been debated until it had passed through the Constitution Review Committee.

Speaker of the House, Yakubu Dogara who presided at the sitting, sustained Ibrahim’s argument, saying: “I think Sadiq is right.

“We may just be wasting our time, if it does not scale through in the constitution amendment committee.”

Consequently, the bill was referred to the House Special Ad-hoc Committee on the review of the 1999 constitution headed by the Deputy Speaker Yussuff Lasun.