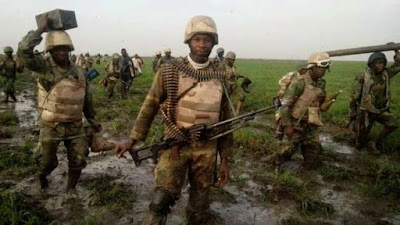 The Nigeria Military arrested More than 40 foreigners  in the last one week, following the fall of the dreaded Sambisa Forest, The Nation has learnt.

According to a military source, the identities of the foreigners and their missions in Sambisa Forest will not be revealed untill after a thorough screening has been completed.
Intelligence officers are profiling the foreigners, who are suspected to be providing “back-up” for Boko Haram.

The profiling of the foreigners has started to determine whether or not they were working in cahoot with Boko Haram insurgents, who are fleeing their former stronghold.
The military has blocked all known entry and exit  points to Sambisa Forest to hem in  the remnants of the insurgents.

: “”In the last one week since we launched massive operations in Sambisa Forest,  we have arrested over 40 foreigners.
“We will come up with the details later after the profiling of these suspects. They are all being debriefed. But we discovered that there were so many foreigners in the midst of Boko Haram.
“We have also rescued  a lot of people who are being screened too.”
Responding to a question, the source explained the significance of the military routing of the insurgents in Sambisa.

He said the troops’ success was no fluke.
He added: “As for the operations in Sambisa Forest, our gallant troops have successfully taken over Camp Zero and Camp S (Shape) which are the headquarters of Boko Haram.
“The success of the operations is significant because there is no habitation beyond these areas in Sambisa Forest. The area is about 66,000 sq kilometres and there are so many parts uninhabited.

“Many insurgents, including their leaders, were killed and many were captured. Many insurgents are now fleeing. The situation now is that Boko Haram insurgents have been dispersed and dislocated.”

On the fate of the remaining Chibok girls, the source said: “The fleeing Boko Haram insurgents must have relocated them from Sambisa Forest but we are already hunting for them.”
Director of Defence Information Brig-Gen. Rabe Abubakar, said: “The operation in Sambisa Forest is still ongoing. Troops are not relenting. We are now all over the place. We’ll ensure no entry to Sambisa Forest; no exit.”

“We have advised Nigerians to be wary of fleeing insurgents who may likely disguise.”
A source in the Department of State Services ( DSS) yesterday said the invasion of Sambisa Forest had entered the second phase, which is the pursuit of the fleeing insurgents.

The source, who admitted that the operations in Sambisa were both intelligence-driven and military onslaughts, said the elimination of the insurgents from the forest was 90 per cent completed.

The security chief added: “We have finished almost 90 per cent of the job with Boko Haram. We are now in the second phase which is the most difficult. We are pursuing the fleeing Boko Haram insurgents.

“The good thing is that we prepared for this fallout (the fleeing of the insurgents) long before the takeover of Sambisa Forest. We are trained professionals to curtail the effects of Boko Haram insurgency, especially the fallout of routing them out.

“We are apprehending the fleeing insurgents. Even yesterday, we took some of them in.”