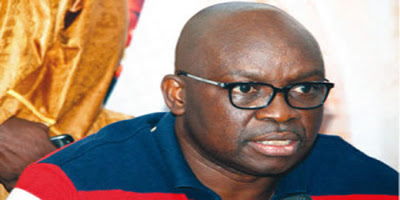 Ekiti state Govenor Fayose  applied to the court, after the expiration of the court’s earlier order, for the release of the property, which comprised four units of four-bedroom at Chalets 3, 4, 6 and 9, Plot 100 Tiamiyi Savage, Victoria Island, Lagos; 44 Osun Crescent, Maitama, Abuja and Plot 1504 Yedseram Street, Maitama, Abuja.

Justice Nnamdi Dimgba of the Federal High Court, Abuja yesterday refused the request by Ekiti State Governor Ayodele Fayose to release some of his houses temporarily seized by the Economic and Financial Crimes Commission (EFCC).
Justice Dimgba had on July 20 granted EFCC an order of interim forfeiture of the properties for 45 days, which lapsed on September 4.

In opposing Fayose’s application, EFCC described it as academic, on the grounds that it had got another forfeiture order from another judge, having discovered that Fayose allegedly acquired the said assets, using other individuals and firms.

Justice Dimgba, earlier yesterday, heard Fayose’s lawyer Mike Ozekhome (SAN) and EFCC’s lawyer Kayode Latona argued the application and counter affidavit.
In a ruling yesterday evening, the judge said the EFCC could not continue to hold on to the houses on the strength of his order, which lapsed on July 20.

The judge, however, refused to direct the EFCC to unseal the properties, citing a fresh order made by Justice Okon Abang (also of the Federal High Court, Abuja) on November 3.
Justice Dimgba said: “In the light of the foregoing, I hold that the prayer on the motion is hinged on this court’s order of July 20 and affirmed on August 2, being a consequence of the order which lapsed on September 4.
“It is my further holding that the continued sealing and occupation of the said seized properties are hinged on the order of November 3 given by Justice Abang.
“This court is unable to comment on the order made by Justice Abang.”

The judge, however, asked Fayose to investigate the circumstances surrounding the exparte application” with which the EFCC obtained the November 3 order to verify if the anti-graft agency made full disclosure of the history of orders on the said property to Justice Abang.
He said Fayose was entitled to approach Justice Abang’s court with his application for the setting aside of the order made on November 3.

The judge said contrary to the contention by EFCC’s lawyer, Fayose’s application was not academic since the orders he made and that which Justice Abang made touched on the same set of properties

He said Fayose was entitled to include the opinion expressed in his (judge’s) ruling and the outcome of his (Fayose’s) investigation while making his (Fayose’s) case before Justice Abang.