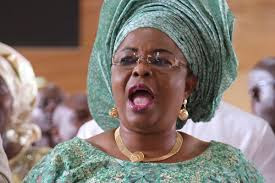 The Federal High Court in Lagos has ordered the freezing of multiple accounts of former First Lady, Patience Jonathan, over allegations of receiving proceeds from fraud. One of the account domiciled with Skye Bank plc has a balance of $5,316.66…

According to Justice Mojisola Olatoregun  the order comes sequel to a further affidavit in support of Ex-parte originating summons sworn to by Abdulahi Tukur, an operative of the Economic and Financial Crimes Commission (EFCC), and filed before the court by EFCC prosecutor, Rotimi Oyedepo requesting the court to urgently direct the managers of the bank accounts contained in the schedule filed with the summons (FHC/L/CS/1343/16) to, in the interim, forfeit the money in the accounts, to prevent further tampering with such.

Also affected by the order are five companies which are Finchley Top Homes Limited, Aribawa Aruera, Magel Resort Limited, AM -PM Global Network Limited Pansy Oil and Gas Limited. Finchley Top Homes Limited is alleged to have fraudulently open account number 1102001996 domiciled with Ecobank Plc and has a current balance of N226,376,700.23 and a fixed deposit with a balance of N1,099,511,484.88.

Esther Oba was found to have opened account number 0019213689 with Diamond Bank and has a current balance of $429,381.87. EFCC said it carried out analyses after receiving an intelligence report, which showed that the accounts ought to be investigated. As such, Mr. Tukur averred that it would serve the course of justice to grant the application for such.