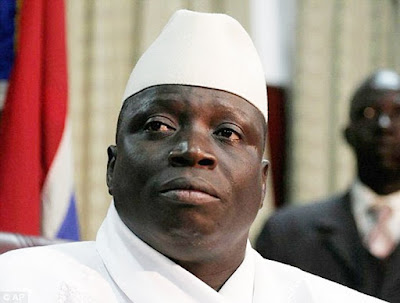 ECOWAS leaders warned President Yahya Jammeh of The Gambia  yesterday that they would not hesitate to send MILITARY  troops to Banjul, if Jammeh, who lost the election to opposition candidate, Adama Barrow, fails to step down January 19 2017.

Senegal,which surrounds much of The Gambia, has been designated to lead the proposed military intervention, president of the Economic Community of West African States, Marcel de Souza, told reporters in Bamako,Mali.

“The deadline is January 19 when the mandate of Jammeh ends,” de Souza said.

“If he doesn’t go, we have a force that is already on alert, and this force will intervene to restore the will of the people.

According to the nation reort, the senegal preseident made it clear that  “No one has the right to oppose the will of the people.”

Jammeh initially accepted defeat only to make a U-turn a week later that the election was marred by irregularities.

That was after Gambia’s Independent Electoral Commission (IEC) claimed that it had erred during vote counting, and Barrow’s margin of victory had narrowed from 9% to 4%.

Despite the changes, the commission said that the new tally leaves the outcome of the election unchanged with Barrow receiving 43.3% of the vote and Jammeh 39.6%.

Jammeh  is contesting the vote at the Supreme Court due to what he says are “unacceptable abnormalities”.

The country’s apex court adjourned the case to 10 January.

Barrow is due to be sworn in on 19 January.