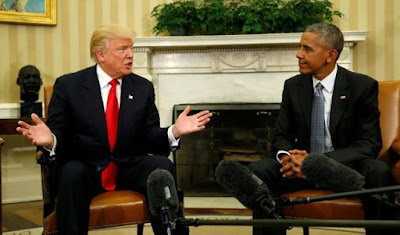 During President Barack Obama interview with former senior adviser David Axelrod Obama said that he thought he would have won if he had run this year, President-elect Donald Trump fired back on Twitter with a clear conviction of his own.

Trump responded on Twitter later in the day, strongly disagreeing with the president’s assessment and declaring that the “world was gloomy before I won — there was no hope.

President Obama said that he thinks he would have won against me. He should say that but I say NO WAY! – jobs leaving, ISIS, OCare, etc.

The world was gloomy before I won – there was no hope. Now the market is up nearly 10% and Christmas spending is over a trillion dollars!

Clinton spokesman Brian Fallon tweeted a response to Obama’s claim, agreeing that the president could have won. He added that she could have, too, if FBI Director James Comey hadn’t renewed the investigation into her private email server days before the election, a move that Clinton aides have repeatedly blamed for costing her the win.

“I agree Obama would have beaten Trump,” Fallon wrote. “I also think Clinton could have, but for Comey. Despite his win, Trump is very weak.”