Chelsea are on top going into 2017 and perhaps the most ominous aspect of this sequence of victories is that Antonio Conte’s team seem capable of clearing hurdles of different shapes and sizes.

Defend like West Bromwich Albion and they batter away until they find a late winner. Attack like Manchester City and they pick you off with lethal counter-attacks.

Take out the 13-goal leading scorer and the midfield dynamo and Hazard responds with a delightful display of old-school dribbling, like the kid who found a new ball under the tree.
His display was a joy to behold for all but Eddie Howe and the Bournemouth defenders charged with keeping him quiet, and was capped by a penalty, won by himself and coolly converted for his 50th Premier League goal.

Pedro opened the scoring in the first half with a wonderful curling shot and grabbed a third in the final seconds of stoppage time with a deflected finish, though it was later credited as a Steve Cook own goal.

During the moments when they came under threat, Thibaut Courtois stood firm. The keeper has conceded only twice during the 12-match run and one of them was an own goal. Against Bournemouth, he made fine saves to deny Jack Wilshere and Benik Afobe at key moments in the game.

The only snag for Conte was a yellow card for Pedro, which means he will be suspended from Saturday’s game at home against Stoke. But with confidence soaring at Stamford Bridge and both Costa and Kante back in the fray after serving their one-match bans it will not trouble the Chelsea boss.

The new year games mark the halfway stage in the campaign and there is a long way to go, of course, but Chelsea are purring.

For 11 games, this Chelsea charge was personified by the snarling aggression of Diego Costa and the tireless legs of N’Golo Kante.

For their 12th win, it was about the supreme skill and ball trickery of Eden Hazard, with a dash of brilliance from Pedro and another clean sheet. 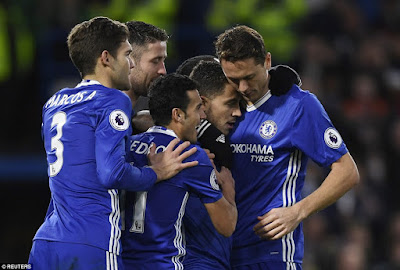 No Costa, no Kante, no problem. Twelve league wins in a row is a new club record and concern will ripple down the table as rivals wonder how on earth they might be stopped

Chelsea dominated and Hazard flourished in his central role, which was enough to justify Conte’s decision to leave Michy Batshuayi watching from the bench until five seconds from the end.

Confidence is rushing through Chelsea to the extent that Gary Cahill halted one dangerous break by Bournemouth with a Cruyff-turn tackle, before launching another foray forward.
Chelsea went ahead midway through the first half. Hazard dropped deep, spun and found Cesc Fabregas, who threaded a short pass in to the feet of Pedro on the fringes of the penalty box.

There was still plenty to do as Pedro accepted the ball under pressure, and he shifted it from under his feet before clipping the sweetest left-footer over Artur Boruc and into the top corner.

Four minutes into the second half and Hazard was running at Bournemouth again. When he was tripped by Simon Francis, referee Mike Jones pointed to the spot. The visitors had been aggrieved by a series of decisions going against them in the first half but this was difficult to dispute. 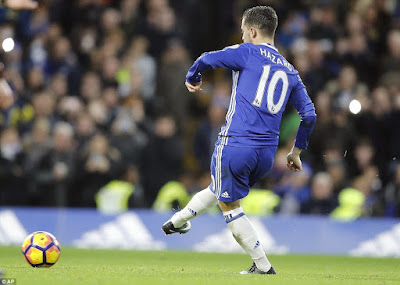