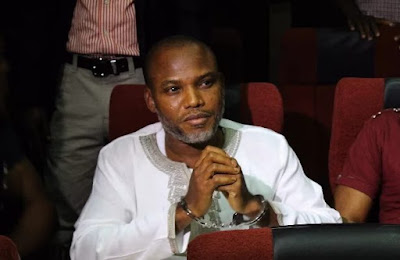 Justice Binta Nyako of the Federal High Court Abuja has denied leader of the Indigenous People of Biafra IPOB, Nnamdi Kanu, bail. While delivering judgment on his application today, Justice Nyako said offences committed by Kanu and his supporters are not entirely bailable. She said the charge of treasonable felony, which Kanu and his supporters have been charged with attracts a life sentence and that their case was sensitive to National security.

Also, the trial judge while reacting to an argument of Kanu’s legal team regarding a recent statement made by President Muhammadu Buhari, where he claimed Kanu was guilty of the offence he is standing trial for said, “The president has freedom of speech; he can express his opinion on any matter.”