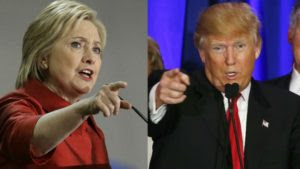 All the respondents interviewed told the News Agency of Nigeria (NAN) in Enugu on Monday that they supported Clinton because she was the best of the four contenders.
The South East/South- South Coordinator of the UK Department for International Development (DFID), Mrs Olachi Ronnie-Chuks, predicted that Clinton would win the election because of her antecedents as former Secretary of States.

“I am supporting Hillary Clinton because of her policy thrust and I know that she will win the election irrespective of her gender and the failed FBI email scandal.

According to the nation report,“Clinton has shown that a woman can contest election based on capabilities and she does not beg for political and economic opportunities,’’ she said.

The coordinator urged Nigerian female politicians to borrow a leaf from Clinton’s character and political will.
A civil servant, Mr Mcdonald Odenigbo said he was sure that Clinton would come out victorious because of her experience and intelligence.

Odenigbo said that if Clinton won the election, Africans would benefit from her foreign policies.
A journalist, Mr Regis Anukwuoji predicted that the democrat would win the election because she defeated Trump thrice during the political debate.
“Trump is a joker and has nothing to offer America and the world at large. So I pray and hope that Hillary wins the presidential election,’’ he said

ALSO READ :The reasons Why Putin fears a Clinton presidency

The Chairperson of the Nigeria Association of Women Journalists (NAWOJ) in Enugu State, Ifeoma Amuta said that Clinton would make history as the first female US president if she wins the election.

“Clinton has the pedigree to be the US president following her antecedents as a former Secretary of States, Senator and first lady.

“She did not achieve the feat because she is a woman but because of her self determination and love for her country,’’ she said.

Amuta said that women and Nigerians in general had a lot to learn from Clinton’s experience.
NAN reports that Americans will go to the polls on Nov. 8 to elect a new president to succeed Barak Obama.