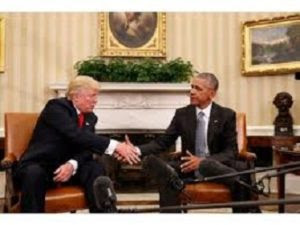 President-elect Donald Trump on Thursday, called President Barack Obama a “very good man” as the two long-time antagonists met in the Oval Office in a meeting to epitomise the peaceful transfer of power from a Democrat to a Republican President.

Obama told reporters that if Trump succeeds, America succeeds at a White House meeting that encapsulated the stunning political events of the last few days since the President-elect’s remarkable election victory.

Trump said he would seek Obama’s counsel as president and Obama promised his full cooperation in the transition period.

Obama said the two men talked about foreign policy and domestic policy and said he was encouraged by Trump’s interest in working together during the transition.
“As I said last night, my No. 1 priority in the next two months is to try to facilitate a transition that ensures our President-elect is successful,” Obama said.
Obama told Trump: “If you succeed, the country succeeds,” as the two men sat in high-backed chairs in front of the fireplace in the Oval Office.

Trump thanked Obama for the meeting which he said had originally been scheduled for 10 minutes and said it could have gone on much longer.
“Mr President, it was a great honour being with you and I look forward to being with you many, many more times,” Trump said.

The President-elect also said he would seek “counsel” from Obama.

As the pool of reporters was led out, Trump told them several times that Obama was “a very good man.”
The President-elect’s first visit to Washington as the President-elect began earlier on Thursday when his private plane landed at Reagan National Airport, marking a new beginning for America.

Trump is also scheduled to meet with House Speaker Paul Ryan and Senate Majority Leader Mitch McConnell while in town.