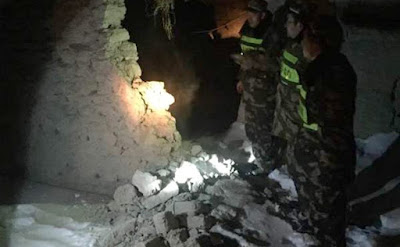 AN EARTHQUAKE with a magnitude of 6.7 struck China’s northwestern border with Tajikistan killing at least one person, destroying houses and severing a railway line in the sparsely populated region, state news agency Xinhua reported on Saturday.

Rescue teams in the Xinjiang region have been sent to help isolated communities in Akto County, which sits on China’s mountainous border with Tajikistan and Kyrgyzstan.

Xinhua said the quake hit the area late on Friday evening, and its magnitude was measured by the China Earthquakes Networks Center.