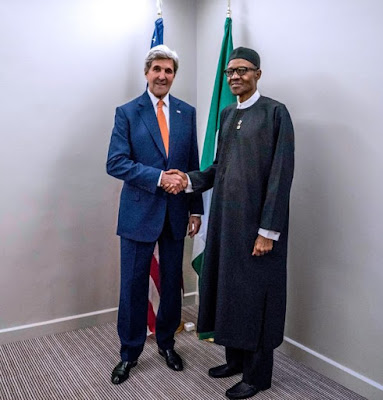 President Muhammadu Buhari, during a meeting with the U.S Secretary of State, John Kerry on the margins of the the Conference of the Parties to the United Nations Framework Convention on Climate Change (COP 22) in Morocco, said that some corrupt Nigerians are using their stolen funds to wage war against his administration.

This was made known in a statement by Femi Adesina, the president’s Special Adviser on Media and Publicity.

“But it is a war we are determined to win, and which we will win. People of goodwill are behind us, countries like America and many others are with us, and we will surely win,” the president said.

Buhari also spoke to Kerry about the war against Boko Haram and the Humanitarian crisis in the North-East region and the rising militancy in the Niger Delta region.

Buhari told Kerry that a presidential committee to tackle the North-East situation has been constituted and it’s headed by Lt.-Gen. Theophilus Danjuma (Rtd).

Buhari said that engagement with the militants are ongoing, adding that the challenge is getting the main protagonists together for dialogue.