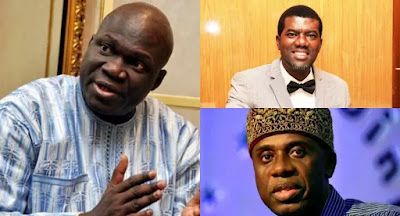 He has questioned the anti-corruption war of the President Muhammadu Buhari-led administration.


In reaction to Abati’s detention, Jonathan spokesman, Omokri wondered why Amaechi was appointed a minister despite allegations leveled against him. Omokri who on Thursday, November 3, took to his Twitter handle to express his displeasure, wondered why the minister of transportation was allowed to walk scott-free after he allegedly stole N235m, while Abati, who only got N50m, was in jail. Read the tweet below: Reuben Abati allegedly got ₦50 million from Dasuki and goes to jail. Rotimi Amaechi admittedly spent $500k on Soyinka & becomes a minister! — Reno Omokri (@renoomokri) November 3, 2016