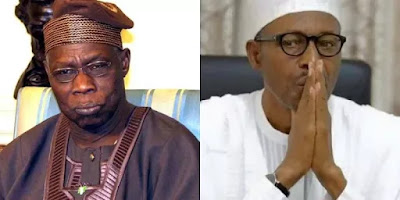 Former president Olusegun Obasanjo has attacked President Muhammadu Buhari for dwelling too much on the past and failing to turn around the fortunes of the country.

Obasanjo says it is tiring to hear the complaints of the Buhari administration when it was voted in to change the mistakes of the past,also the president does not need the $30billion foreign loan to turn Nigeria’s economic fortunes around

The Former President made this statement while delivering the keynote address at the First Akintola Williams Annual Lecture in Lagos on Wednesday, November 23, Obasanjo lashed at the Buhari administration for accusing all previous administrations of mis-governance.

According to Premium Times Obasanjo,advised that since Buhari was elected to change the country, he should concentrate on clearing the mess he inherited. “Now that we have had change because the actors and the situation needed to be changed, let us move forward to have progress through a comprehensive economic policy and programme that is intellectually, strategically and philosophically based,” Mr. Obasanjo said.

The former president used to be a strong supporter of President Buhari but all that seems to have changed. Obasanjo also did not forget to mention that the national assembly is a cesspool of corruption that stinks to the high heavens. This is not the first time he has come after the federal lawmakers of the 8th assembly who also do not have any love lost for him.

He quote, “It is easier to win an election than to right the wrongs of a badly fouled situation. When you are outside, what you see and know are nothing compared with the reality.

“And yet once you are on seat, you have to clear the mess and put the nation on the path of rectitude, development and progress leaving no group or section out of your plan, programme and policy and efforts.

The longer it takes, the more intractable the problem may become.” Obasanjo also wondered why President Buhari needed about $30billion loan to fix the economy

“I am sure that such a comprehensive policy and programme (that will move Nigeria forward) will not support borrowing US$30 billion in less than three years. It will give us the short-, medium- and long-term picture.

“Adhocry is not the answer but cold, hard headed planning that evinces confidence and trust is the answer. Economy neither obeys orders nor does it work according to wishes. It must be worked upon with all factors considered and most stakeholders involved.

“The investors, domestic and foreign, are no fools and they know what is going on with the management of the economy including the foreign exchange and they are not amused. The Central Bank must be restored to its independence and integrity. We must be careful and watchful of the danger of shortermism.

“Short-term may be the enemy of medium- and long-term. We must also make allowance for the lessons that most of us in democratic dispensation have learned and which the present administration seems to be just learning.”