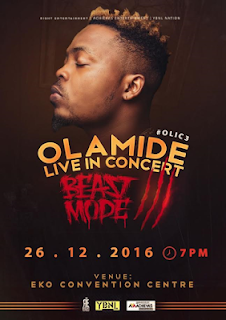 It has been an amazing year for indigenous rapper, Olamide. To crown the many successes of 2016 and give back to his loyal fans, Olamide has announced the 3rd edition of Olamide Live In Concert.
This December, Achievas Entertainment , YBNL Nation Entertainment and Right Entertainment  team up to bring to fans of Olamide, the Beast Mode III.
Plans are also in full gear for the concert and like previous editions, Olamide is set to once again, to ‘unleash the beast’ at the Eko Convention Centre, Eko Hotels and Suites, Lagos on the 26th of December, 2016.
Fans are definitely in for a huge surprise as the organising team of  OLIC III have assured that this edition is going to be absolutely different from preceding editions. There will be surprising changes from the norm of OLIC concerts from props and promotions strategies to never seen before set designs.
From  setting a standard for United Kingdom concerts by selling out tickets hours before the YBNL concert began with fans overfilling the five thousand capacity concert venue to hosting his first ever OLIC concert in Toronto, Canada which was recorded as a massive success, not to forget noteworthy international nominations and awards and of course hit singles like Orobo, Abule Sowo, Owo Blow, Konkobility among others, that have all continued to top music charts locally and internationally, Olamide has shown that he is indeed a master of the game.
By all standards, OLIC I was an absolute success, OLIC II was a massive shut down of Lagos, Nigeria but OLIC III promises to be history making as Olamide and his team are set to bring a concert like never seen before in the history of concerts in Nigeria. The rapper has urged his loyal fans to anticipate the surprise of a lifetime.
For concert updates, log on to  www.oliconline.com
Advertisements
Entertainment