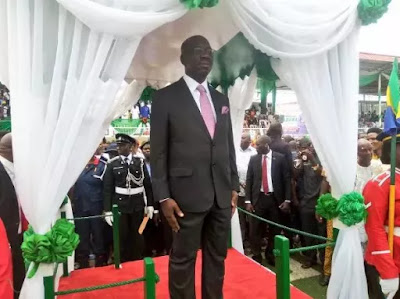 Governor Godwin Obaseki of Edo state on Sunday, November 13, has declared that his government would not be part of “free lunch anymore” as everybody must now work to earn any benefit

According to punch report,Governor Obaseki made this known at the Government House in Benin, adding that everyone must work move the state to its desired level.  He noted that his administration would be radically different from his predecessor as it would focus on governance, rather than politics.

“We are going to be having more governance and less politics, so that we can move Edo forward. But I can assure you that nobody will be left out.‎ There is space for everybody – the young, the not-too-young and the old; we have plans for everybody.

“But the problem we have is that we now have to get value for everything we have. There is no free lunch anymore; everybody must now work to earn. You must work to ‘chop. He said that his cabinet would take shape‎ at the appropriate time, when the tasks and persons qualified to handle them have been identified.

‎He said: “When we have done that, then we will ask who is capable to do it. That is when we will appoint those who are going to do it. So, just give me time. One thing I can assure you is that we will only do the right thing because we know what is at stake.”